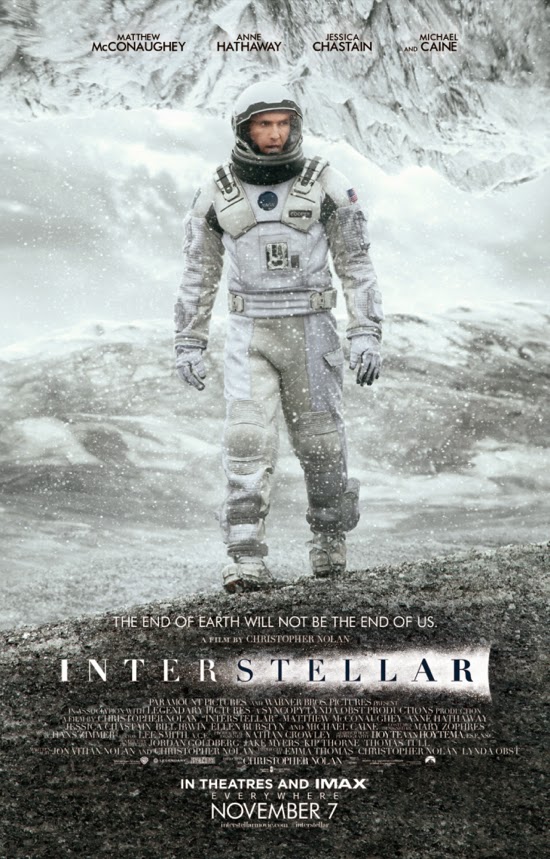 A stellar cast, interred amidst the stars.

At almost three hours in length, Christopher Nolan’s epic SF film Interstellar falls roughly into three acts: humanity clinging to life on a dust-ridden, dying Earth; a last-ditch mission to seek out habitable planets through a wormhole in spacetime; and the consequences (small- as much as large-scale) of that mission going awry. Such is the broad progression of plot. In a critical sense, what plays out on screen is a compellingly envisaged scenario that compromises itself in favour of the box office and then descends further still into the warm glow of metaphysics. For all its cinematic excellence, this is the equivalent of Albert Einstein and his conceptual twin brother playing four-dimensional Monopoly and each contriving to make need of a specially tailored get-out-of-jail-free card. It is an engrossing spectacle, to be sure, but a somewhat unsatisfying comedown from what might have been.

In terms of bringing the script to life, Matthew McConaughey leads an outstanding cast performance, the tone of which he sets in the first act alongside charismatic child actress Mackenzie Foy and an effortlessly world-weary John Lithgow. Interstellar is told through unaffected, very human characters, with Jessica Chastain and Casey Affleck adding a touch of despair to the grim faces of act two. Michael Caine does what he does, and Anne Hathaway is more Sandra Bullock than Barbarella in taking womankind into space. Even the NASA robots have real personality. The one blemish, it could be argued, is Matt Damon, whose name is to the cast list as the roiling, pestilent blight is to future Earth’s crops, hanging with Damoclean foreboding until his appearance in the third act signals the onset of the apocalypse. Damon is revived as the craven Dr Mann, a minor role in which he can be seen thumbing his nose at those who might question his acting range. Mann’s aura is intentionally jarring, his demeanour scripted to arouse our suspicions; let it be noted, then, that Damon can play an unconvincing character as convincingly as he can a convincing character unconvincingly. His injection into the storyline cuts the hair by which our belief was suspended, and triggers a cinematic cataclysm of untethered action/drama.

Like Gravity before it, Interstellar strives for realism but comes to rely on a manipulation as overt as it is irreconcilable with the story being told. The state of play is signposted at any given moment by Hans Zimmer’s score, the excellence of which is difficult to judge because of its prescriptive and patronising, heavy-handed use of VOLUME. Whoever mixed the film has done Zimmer no favours; nor the actors, who at times have their lines drowned out entirely so that music may be used to prod the audience towards whatever emotional shearing shed Nolan has designated. This bombastic approach becomes more prevalent as the film progresses. By the time the supermassive black hole has selectively extended its gravitational pull to reel in any ship lifting off from Matt Damon’s planet (bypassing the influence of the sun around which that planet orbits), the soundtrack has gone berserk. The effect is not unlike that of an archetypal miscreant whistling in faux innocence to cover up a petty larceny, only in Interstellar’s case this has been amplified to decibels beyond the credulity horizon.

Sometimes a writer will begin with a particular idea, only later to find that the framework they construct to present that notion comes to hold more interest than the premise itself. Given Interstellar’s unimpeachable first act and then the eyebrow-raising liberties taken by the second in reaching the incongruous fanfare of the third, it would be easy to assume this is what happened to Christopher Nolan. The truth, however, is somewhat less flattering. Nolan is credited as having co-written Interstellar with his brother Jonathan, but as it transpires their project was not a genuine collaboration. Jonathan in fact wrote an earlier script by himself, and it was the first third of this that was used as Interstellar’s opening, the remainder being binned so that Christopher had somewhere to affix his own, less grounded story idea. In filmmaking in general and Hollywood in particular, success and failure are relative terms, but whatever the perspective of verdict passed on Interstellar – glass one-third empty or one-third full – there should be little wonder that such a piecemeal, Frankensteinian approach has led to at least some measure of ruinous consequence.

There will be many viewers, of course, who take no issue with Interstellar’s storyline, and indeed who will point to the involvement of theoretical physicist Kip Thorne serving as both scientific consultant and executive producer on the film; instead of taking this legitimising presence with a grain of salt, such people will toss that salt over their shoulders and maintain that Christopher Nolan’s physics are faultless. Well… Yes, clearly a lot of attention was paid to the visual depiction of wormholes, black holes and associated phenomena, but that’s not altogether the same kettle of fish as declaring them scientifically accurate. Metaphysics aside – and the third act of Interstellar surely is no more scientific than Flatliners or What Dreams May Come – we still are left with some decidedly odd compressions of plot-space and plot-time, while the real life effects of time dilation, though soundly based in theory, are applied inconsistently and only when they serve Nolan’s purposes. When they don’t, they are ignored, and in this respect the so-called laws of physics are treated more in the sense of judicial laws than the universally immutable workings of cause and effect. Perhaps to some extent this is unavoidable, for a film without poetic license is liable to be a very dry film indeed. Yet, Christopher Nolan’s two-thirds of the script compounds any affront by falling prey also to an unconscionable compression of characters’ thinking time. Whether or not a story can withstand bad physics, metaphysics or consciously eschewed physics, it really is going beyond the pale to have the protagonists make decisions – choices that speak to the very survival of the species – in less time and with less discussion than most people would need in standing in the dairy section, deciding whether to buy low fat or regular. Drama there must be, but when the milk is spilt and Newton’s apple turns pear-shaped, our heroes’ calamities should move us to something greater than a sardonically muttered, “Whoops.”

Interstellar is by no means a bad film; indeed, its positioning amidst the upper echelons of its cinematic peers might well suggest a manifest disproportion between criticism levelled and criticism warranted. But then again, with Christopher Nolan’s having set his sights on the stars, Interstellar surely could have been a masterpiece (and for an hour or so looked like being just that). The fact that it so poignantly loses its way is in a sense far more distressing than the abject floundering exhibited by its happy-go-hapless Hollywood fellows. Interstellar tantalises, but falls short: not with the high-octane bluster of Evel Knievel but rather the down-to-earth tragedy of a Cape Canaveral launch that, for all its meticulous planning and having just made a successful lift-off, inexplicably then jettisons the wrong rocket segments… and if, further to this, such a mishap should come to form the crux of a closed time loop, then let it be noted that cosmic contrivances are not in all contexts as interesting as Christopher Nolan might have thought. When E.T. phoned home, was he unwittingly calling through time and summoning himself to the rescue? Indeed, no – and let us all join together in extending one long, bony finger at the prospect of a mashup remake in which Drew Barrymore plays her own mother – but with such doomsday scenarios in mind, could it be that Nolan injected Interstellar with a weak dose of glitzy goose so as to immunise it against a fully-fledged bout of Tinseltown turkey later in life? Stranger things have been known to make themselves happen.
Posted by Stephen Theaker