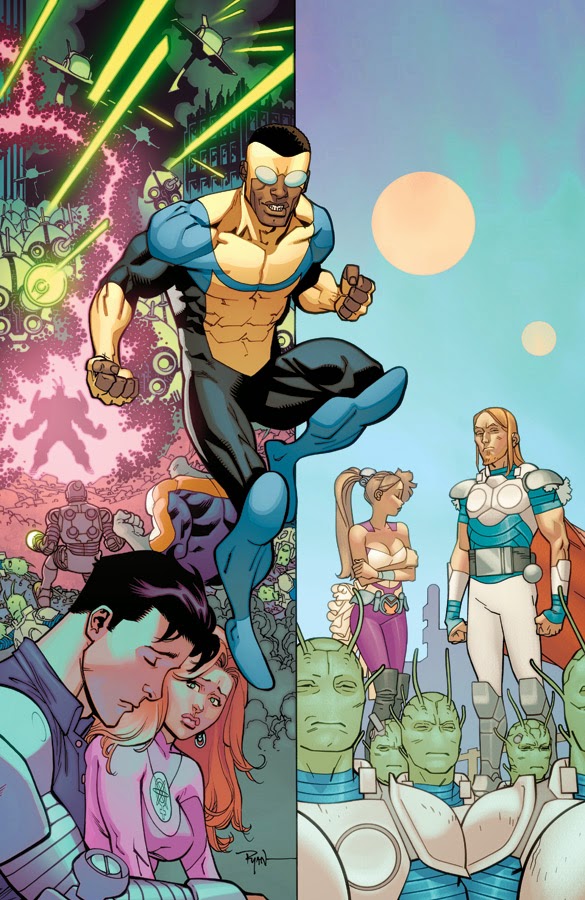 Invincible, Vol. 17: What’s Happening (Image, ebook) is written by Robert Kirkman, with pencils shared between Ryan Ottley and Cory Walker, who illustrate scenes depending on whether they take place on Earth or in the alternate, quick-time dimension from which the Flaxan Empire launches its regular invasions. The latter are flashbacks, showing us what happened when Monster Girl and Robot were stranded there, explaining their tense relationship and the way that she is now a full-grown woman. (Previous volumes had shown her slowly growing younger the more she used her power to transfer into a huge green monster.) The scenes on Earth show follow the old and new Invincibles. The original Invincible is having trouble with his powers on the blink, the consequences of which are demonstrated in the brilliant shock ending to chapter one. The new Invincible, filling in to keep the Invincible business going, has to fight the alien invaders, though he’s glad for the break from his visiting parents, forever comparing him to the brother whose failings they don’t know. Invincible is always a reliable source of superhero adventure, and volume 17 was no exception. If it felt like a less than weighty read, that might be down to my last reading session on this comic having lasted for about 70 consecutive issues! There’s so much to like here. A universe of heroes that may, for all I know, have their own comics, but if they do there’s nothing here that forces me to read them. It isn’t like DC or Marvel, where endless company-spanning crises leave almost every individual superhero title feeling like a badly cut jigsaw piece. If an infinite crisis or a civil war happens in Invincible’s universe, it’ll happen in his comic. ***
Posted by Stephen Theaker