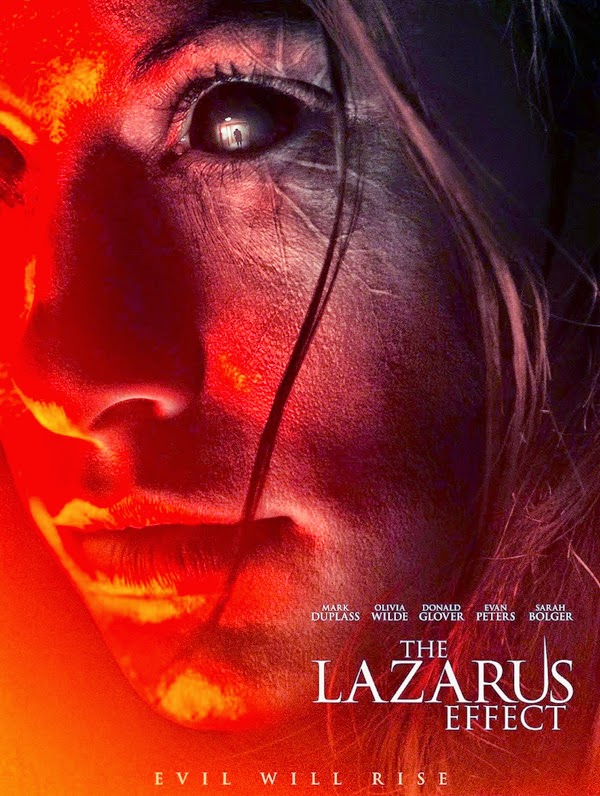 Scientist dies, comes back to life, goes on killing spree. What’s not to like?

Ever since Dr. Frankenstein stitched together his monster, people have been fascinated with laboratory experiments on humans… especially when it comes to what could go wrong.

The Lazarus Effect, Hollywood’s latest foray into terror via test tube, explores the repercussions of chemical-based human resurrection. Director David Gelb mixes horror, thriller, and sci-fi elements in a film that, though not staggeringly original, holds up as an elixir for the horror devotee.

Zoe (Olivia Wilde), her too-busy-to-marry beau Frank (Mark Duplass), and science geeks Clay and Niko (Evan Peters and Donald Glover) have spent four years tucked away in a university lab. Their research started with a way to temporarily prolong life, but then evolved – maybe devolved is a better word – into the “Lazarus Serum”.

The group first resurrects a dog, but this lab dog is no lap dog. Rocky’s erratic behavior and supercharged brain indicate the Lazarus Serum might be more than what it’s stirred up to be.

A third of the way through the film, a corporation maneuvers a hostile takeover of the research and the lab. The infuriated quartet and videographer Eva sneak into the lab to solidify their claim on first to raise the dead. However, when Zoe flips the power switch, she gets electrocuted and dies. Frank convinces his colleagues to inject the Lazarus Serum into her brain. Not a well-reasoned decision.

Zoe isn’t quite Zoe anymore. The serum has kicked her brain into hyperdrive. As her nightmares of a girl in a burning corridor grow more vivid, Zoe develops a collection of powers straight from the Stephen King compendium: pyrokinesis, telepathy, telekinesis, and precognition, to name a few. Of course all these psychic gifts come with a loss of sanity. Zoe struggles with whether the colleagues she’s locked in the lab want to help her or put her down.

Wilde and Duplass head up a cast of characters whose moderate personalities seem consistent with what one would find in a lab. This lack of eccentricity means more focus on the action. The most energetic scientist is Clay, played by Evan Peters of American Horror Story fame. Peters offers a performance reminiscent of (but by no means as outrageous as) a young Philip Seymour Hoffman’s Dusty Davis in Twister.

Another notable strength of this film is its soundtrack. It starts with the American Horror Story-like opening credits: creepy music accompanies extreme close-ups of threatening-looking elements slithering and coalescing. On several occasions, the viewer is treated to Mozart’s “The Queen of the Night Aria”, which would make watching cell cultures incubate entertaining. During the most intense scenes, a jarring shriek escalates the action in an admirably unsubtle way.

There are masterful lab horror films like The Fly and the less well-known Splice, and there are their deliciously preposterous cousins like I-Frankenstein. The Lazarus Effect falls somewhere in the middle. Though the trailer tries to connect it (by way of producer) to Insidious, The Purge, and Paranormal Activity, The Lazarus Effect is, by comparison, playing in the minor leagues. Still, many love to (and even prefer to) watch those minor leaguers.

The critics blasted The Lazarus Effect with typical complaints: highly derivative, chaotic, an over-qualified cast wasted by an impatient plot. Even the general public has met it with a tepid response.

Nevertheless, there are a few perhaps juvenile viewers who applaud this film, and I, fortunately, count myself among them.
Posted by Douglas J. Ogurek