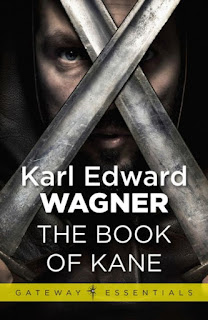 Kane is a warrior, big as two of his friends put together, three hundred pounds of bone and corded muscle, tremendously strong, startlingly agile, able to see in the dark, red-haired and left-handed. He is very long-lived, supposedly the son of the original Adam, and has in the course of that life accumulated many useful abilities, some of them mystical. Time to him has no meaning, “a dozen years or as many minutes – once past, both fitted into the same span of memory”, and when he makes his entrance in a story, it is often a surprise to those who thought him long-dead, or just a legend. The five stories in this collection all find him in a pseudo-medieval setting, the longest, “Reflections for the Winter of My Soul”, stranding him in an isolated castle threatened by highly organised wolves. Reading that story, one could think Kane a hero, but later stories make it clear than he is a thoroughly bad person, a rapist (“Raven’s Eye”) and a mass murderer of men, women and children (“The Other One”). In “Misericorde” we see him at at work as an assassin, while in “Sing a Last Song of Valdese” he plays a minor role in revenge being taken upon another gang of rapists and murderers. He isn’t a character you can admire, and of course you don’t have to always admire characters to enjoy reading about them, but “Raven’s Eyrie” in particular makes for uncomfortably problematic reading, being apparently more dismayed by how Kane’s victim let the trauma affect her than by the crime itself. Perhaps this story appears out of chronological order because as the first story it would have left readers much less sympathetic to its protagonist. The ebook does have rather odd pagination, with the first story beginning on page 187, the second beginning on page 83, the third on page 143, but is mostly free of the scanning errors that have plagued other SF Gateway titles. A book of fairly decent stories with a loathsome protagonist. Stephen Theaker ***
Posted by Stephen Theaker