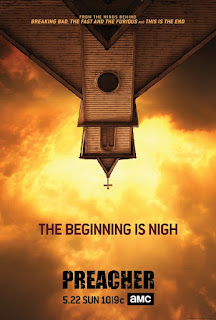 The comic Preacher was in development for so long, first as a film and then as a television series, that you might easily have concluded that there was something fundamentally unfilmable about the project. You – okay, I – might have thought there was no way this programme, having finally made it to the screen, could possibly live up to the standards of the comic. And it’s quite an old comic now. Would it still work? Well, anyone who had those thoughts, me included, has been proven utterly wrong by a programme that rollicked with an energy rarely seen on television, that has left every other programme since feeling muted and low-key. But not everyone has read the comic, and the show is not quite the same as the comic, so I should say something about the story. Jesse Custer (Dominic Cooper) is a half-assed preacher in a dirty, rotten town. His church helper Emily (played by Lucy Griffiths, the former Maid Marian in the BBC’s Robin Hood) has a crush on him, but he’s in no fit state to notice. Then three lightning bolts strike his life. Genesis, the offspring of an angel and a demon, embeds itself within his body, giving him the power to command. The vampire Cassidy (Joseph Gilgun) drops out of an aeroplane and pals up with Jesse in a bar. And old flame Tulip O’Hare (Ruth Negga) roars back into town, wanting Jesse to help her get revenge on an old colleague who left them in the wind. All of a sudden Jesse’s in the middle of a lot of trouble, so it’s a good thing he is surprisingly handy in a fight. It seems as if this show might, like The Walking Dead, cluster its seasons around particular locations, as this one is mainly set in the town of Annville, but it works very well, and at the end of a very satisfying season it’s a treat to know how much more from the comics is still in store. The cast is brilliant, coping with the shifts in tone from horror to comedy as if it was all the same thing, and without exception perfectly portraying the characters we’ve loved and loathed from the comics. Credit to Jeanie Bacharach, casting director, who must have clapped herself on the back for a job well done after watching each episode. One minute it reminds you of Justified or Fargo, the next it’s Monty Python or Hitch-Hiker’s Guide to the Galaxy, all while successfully reclaiming its storylines from Supernatural in a way that Constantine didn’t quite manage. Altogether it adds up to something totally new. Confident, brash and bloody, I reckon it’s my favourite programme on television right now. *****
Posted by Stephen Theaker