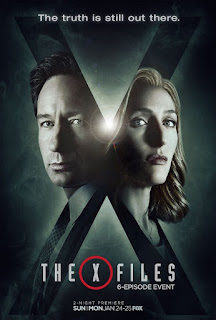 It took me a little while to warm up to The X-Files when it first began. Round about the episode “Deep Throat” is where I started to become a fan, rather than someone who watched it because my girlfriend was watching it. Before then I had a big problem with the way Mulder would throw lots of so-called evidence at Scully in support of his irrational crackpot theories, evidence that in our world had been totally discredited, and then be proven right by what came next. That led to a resurgent real-world interest in the paranormal, just before mobile phones and their cameras laid ghosts, nessies and bigfeet to rest forever, but I made my peace with it after realising that on Mulder’s Earth there is good evidence, because in his world monsters and aliens do exist. Of course I then became frustrated with the idea of Scully being the rational, scientific one, when she ignores all the evidence – the implication being that in our world that’s what our scientists do with regard to the paranormal. This new season, following hard on the heels of Gillian Anderson and David Duchovny’s showstopping performances in shows like Hannibal and Californication, severely tested the grudging peace I had made with all that. A two-part story, “My Struggle”, where the worst nightmares of anti-vaxxers and rightwing talk show hosts come true, for example, left me very cold, to the extent that I’d call it irresponsible. If it had been good dramatically and creatively, that would have been one thing, but it was like a Syfy original movie written by the kind of people you block on Twitter. Similarly, “Babylon” explores the aftermath of an apparent terrorist bombing, and you wait for the supernatural twist, for our stereotyped assumptions to be undercut... and it doesn’t come. The paranormal element is that Mulder is apparently now able to enter people’s minds, Dreamscape-style, if he takes the right drugs. And don’t get me started on the “everything you know is a lie” bit they try to pull, yet again. Those were three of the worst episodes of the programme to date. But I’m still glad it’s back. I’d rather have Mulder and Scully back for bad episodes than none at all – and the three other episodes of this short series were good enough to outweigh the bad. “Founder’s Mutation” and “Home Again” both delivered a series of good scares, while “Mulder & Scully Meet the Were-Monster”, featuring the hilarious Rhys Darby as a man who turns into a lizard creature, or so it seems, was a delight from start to finish, one of my favourite ever episodes. So a mixed season, but that’s how it often was with The X-Files, and even the bad episodes had their share of startlingly weird imagery. What worked, worked very well. I hope there are more seasons to come. ***
Posted by Stephen Theaker