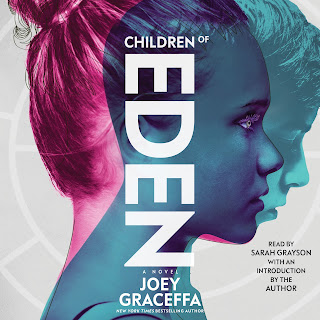 This is the Audible edition of Joey Graceffa’s first novel. I enjoyed his previous memoir and I was just as pleased with this book. Although it is published under his name, he didn’t actually write it. He probably came up with the ideas, but I think that it might be written by Laura L. Sullivan because she is thanked at the start. He is more well-known as a YouTuber and this is why I was interested in the book. He is very funny in his videos and he comes up with very creative and exciting ideas. I’m a big fan of his.

In this dystopian future couples are only allowed to have one child because they don’t have enough resources. Almost everything is artificial: the plants, the food, everything. The world was saved by Aaron al Baz. He made the Eco Panopticon which is what keeps the world (and the humans) alive. Rowan is a girl who has lived her life as a second child. Her parents didn’t want to kill her so they kept her hidden and had the birth at home so that no-one would know they had a second child. Rowan is Ash’s twin and they are very close but Rowan wishes that she could go outside the wall and make friends.

So she does. She goes outside and has an huge adventure. She meets Ash’s crush and they fall in love and Rowan kisses Lark (Ash’s crush). But then she gets found out and reported so she needs to hide somewhere. Lachlan takes her into the underground, which is a home for second children, and tortures her to check whether she was actually a normal second child. Second children can be identified by their colourful eyes. At birth all legal children have their eyes protected from the artificial air but people can survive a long time without getting their eyes damaged. They go on an adventure that will save the second children but end up saving the world, solving a mystery and revealing secrets.

I really enjoyed the story because it was full of suspense; the writer managed to fit in a lot of other dilemmas while the main storyline was going on. The vocabulary kept me engaged and made me want to keep listening. I felt the panic in the parts with the wall because you never know whether she’s going to get caught or fall. It is definitely open to sequels: it has an ending that could lead on to another story.

I am not really bothered that Joey Graceffa didn’t write it because it’s fun to know that it is based on his ideas, and even though it’s not written by a YouTuber, it’s still a great book. I enjoyed this so much and I would love to read more books by Laura L. Sullivan and listen to more books read by Sarah Grayson. I think that it is very well read by her. She really makes it feel like Rowan is speaking to you, and she also changes the tone of her voice to show different characters very well. If you are a teenager you will especially enjoy this book, as I did. ***** LCT