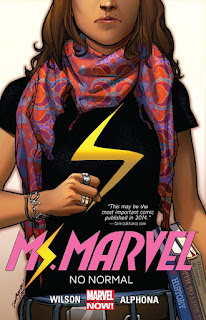 Kamala Khan is a smart fifteen-year-old girl, living in New Jersey with loving parents who quite understandably don’t want her going out at night and an older brother who’s keener on virtue than finding a job. She works hard at school, has a pair of good friends, clever Bruno and proud Nakiyi, and somehow deals with the microaggressions of popular white girls without losing her temper. Her hero is Captain Marvel; Kamala’s been known to write quite popular fanfiction where the Avengers protect the My Little Ponies. One night she gets fed up with her parents and sneaks out to what turns out to be a rather crummy party. Nothing bad happens till she is on her way home: the terrigen mists descend, and she wakes up in a black shell, transformed into a younger Captain Marvel. It looks like Kamala is an Inhuman, with shape-changing powers that she’ll explore in a bunch of different ways over the rest of the book. Growing a big hand, looking like a shop window dummy, shrinking to the size of a mouse – she’ll get the hang of it all while amusing the reader and trying to extricate Bruno’s idiot brother from a tight spot. Like the young Peter Parker, she’s a teenage superhero trying to do the right thing despite the pressures and obligations of school, family and friends, and this feels from the off like classic Marvel at its best: contemporary, imaginative, funny and relevant, with excellent artwork. Kamala is an utterly charming fangirl hero, tailor-made for modern teenagers. ****
Posted by Stephen Theaker