The Dispatcher, by John Scalzi (Audible) | review by Stephen Theaker 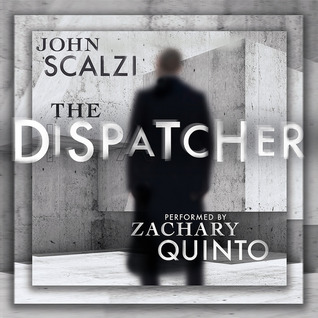 This is a two hour twenty minute story, told in the first person and read with gusto by Zachary Quinto (Spock from Star Trek films eleven to thirteen). He plays Tony Valdez, the dispatcher of the title. We first meet him in a hospital, where his presence in the operating theatre is required by the insurers. He’s quite cagey about the precise nature of his job at first, and we know the surgeon isn’t happy about having him in there. Is he there to kill people if the treatment gets too expensive? Is the patient someone of such significance that the staff will be punished if he dies? Or is this like Nick Mamatas’s The Last Weekend, where someone has to drill the deceased before they turn into zombies? We don’t find out until the operation takes a turn for the worse and Tony has to step in to do his thing. His job is interesting, as is the reason it is needed. The story soon segues into a hardboiled search for a missing dispatcher, while exploring throughout the implications of the difference between Tony’s world and ours. The two-hour length reflects how much this resembles the pilot for a television series, with Tony teaming up with a tough female co-star for an adventure that establishes a strong premise, while leaving plenty more to be investigated. It’s good, and very well read. It was free to Audible members at the time of writing, but if it’s not by the time you read this it is well worth one of your Audible tokens. ***