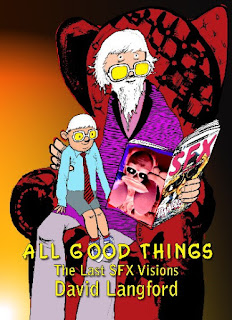 As every author secretly knows in their heart, the raison d’être of the reviewer is revenge. Each review is an opportunity to strike back against a literary overclass that refuses to accept us in its ranks, a blow against the publishers who rejected our carefully-crafted works of art, a signifier to our readers that although we are not yet famous for our own work, any book we wrote would of course be better than the book we are reviewing, because we are clever enough to see its flaws where its own author could not. We prove ourselves superior with every review, and what’s more our review takes mere hours if not minutes to write, while the slovenly author takes months if not years to produce the slabs of bookmeat poured into our grinders.

Sometimes, though, it’s more specific than that. More personal. The reviewer, happily working his way through the pile of to-be-reads and sorting them into the read-in-beds and the better-off-deads, comes across a book by an author who has earned his enmity, his anger, his wrath, his undying thirst for literary vengeance. Maybe this new book was written by someone who, a mere fifteen years before, described the reviewer’s second self-published book as “a Stainless Steel Rat adventure with important organs missing”. Or perhaps this new book was written by someone who said it was dire, “mercifully short”, or “memorably forgettable”, or at their kindest said it was “refreshingly pointless”.

Perhaps this crucifying review appeared in a nationally-published magazine by the name of SFX, and perhaps this new book is a collection of one hundred columns from that magazine. Perhaps. And perhaps then the reviewer begins to sharpen his hatchets, cleans off the blood, lays out the plastic sheeting, and prepares to go to work on the unwitting spawn of a mortal enemy.

But sadly for the bloodthirsty, for all those who like to think ill of reviewers, who don’t grant us the ability to put away our prejudices and give every book a fair chance, that’s where the story takes an unexpected turn, since the reviewer then finds the contents of this book to be as aggravatingly wise, funny and enlightening as all the other Langford columns he read, those that appeared in the first hundred issues of SFX (the issues he read before he let his subscription lapse, tired of learning the plots of television programmes two years before they appeared on British television).

And at that point the poor reviewer, frustrated in his desire to retaliate, his need to lash out, is forced to admit that the two stars he received from David Langford were at least double what his book deserved, while All Good Things: The Last SFX Visions deserves at least double the maximum five red noses he is allowed to award it, and the reviewer is forced to declare it essential reading for anyone who wants to know what’s what in the world of science fiction.

Available in paperback and in a limited edition signed hardback. Buy it here.


NB: this is a fake internet review, written for fun without having read the book to raise money for Comic Relief.
Posted by Stephen Theaker