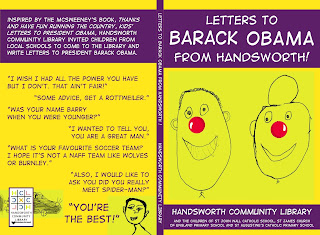 Remember what it was like eight years ago? A new president was in the White House, but everything was so different. The mood was hopeful, we thought the future would be better than the past, and that is reflected in this book of letters and drawings that were sent from Handsworth, a gloriously multicultural part of Birmingham, to Barack Obama. The librarian who put the project together was nominated for the Chamberlain Award, and received a letter in reply from the White House (now framed and hanging on her wall), but the stars of the show are the local children, with their funny questions and quirky drawings.

"I wish I had all the power you have but I don't. That ain't fair!" said one. (Are we sure Donald Trump wasn't living in Handsworth back then?) "I wanted to tell you, you are a great man," said another in a matter-of-fact tone. "What is your favourite soccer team? I hope it's not a naff team like Wolves or Burnley," asked one pupil, with an admirable grasp of the most important issue of the day. "Was your name Barry when you were younger?" asked another, a question to which we now know the answer to be yes, thanks to the Netflix original movie of that name.

The project was inspired by the McSweeney's book Thanks and Have Fun Running the Country, in which the letters were by American children. Here the letters are by British children, a crucial difference that perhaps explains the greater interest in association football shown within its pages. One of the most charming parts of the book was how often the children drew pictures of themselves with the new president, as on the cover. They trusted him, could imagine him hanging out with the class, buying them an ice cream.

It's hard to imagine any British children wanting to spend time with the current president, though if they did I imagine they would put him to shame with their maturity and interest in the world and its future. This book reminds us that it doesn't have to be that way, that we can have leaders we believe in, that give us hope, and even if they don't deliver on every single one of those hopes, it's better than the alternative. I give this book five red noses.