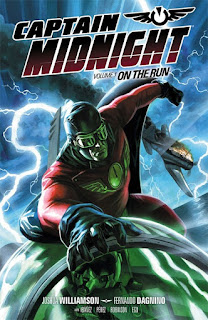 I loved Chuck Dixon’s Airboy series from the eighties, so this book’s similar mix of superplanes and superheroics really appealed to me. Captain Midnight was a hero back in World War II, who fought the Nazis with his engineering genius, two strong fists, a suit that didn’t let him fly but did let him glide, and his allies, the Secret Squadron. They kept going after he went missing, but now, decades later, he’s back, flying out of a storm in the Bermuda Triangle to land on the U.S.S. Ronald Reagan. The authorities are suspicious, his friends are all elderly, and his enemies are still up to no good. This first volume only collects four issues, but it’s a good introduction to the character. We get to see what he’s about, what keeps him going, and why we’d be interested in reading more about him. His return to action after a long absence obviously has strong echoes of Captain America, and fans of Tom Strong and Miracleman might also notice some similarities, but it feels fresh and fun, not least in the way Captain Midnight swoops and soars. Like Batroc with his leaping, or going up and down the half-pipe in a Tony Hawks game, there’s a joy in the sheer physics of it. ***
Posted by Stephen Theaker