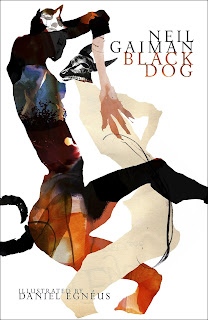 Black Dog is one of Neil Gaiman’s four American Gods stories, all of which have been re-released by Headline in hardback editions illustrated by Daniel Egnéus. The other three are: American Gods itself (first published in 2001 and re-released in an expanded tenth anniversary edition in 2011), The Monarch of the Glen (also reviewed in this issue), and Anansi Boys (first published in 2005). As an update to my previous review, the television adaptation of American Gods is due for release as a STARZ original series in 2017, possibly over Easter. Ricky Whittle will play the part of Shadow, Ian McShane the part of Wednesday, and the duo will be joined by a host of familiar faces from the big and small screen. Black Dog is a novella (or short story – it is, once again, difficult to tell due to the copious illustrations) and was first published in Trigger Warning: Short Fictions and Disturbances (2015), Gaiman’s fourth collection of short fiction (excluding his writing for children). The narrative shares the same protagonist with American Gods, Shadow, and the temporal setting is easily established: three years after his wife’s death and either several weeks or a few months after The Monarch of Glen. The latter novella ended with Shadow leaving Scotland by train, his eventual destination Chicago, but somewhere along the line he exchanged rail for foot and the spatial setting is the first mystery Gaiman presents to his readers. Many clues are provided, some tantalising, some contradictory: the blurb labels a “rural northern village”; but it is not too remote from London; it might be near Glossop; it is surrounded by hills and valleys; it features plenty of drystone walls; and it has its own ghost dog, called Black Shuck. Black Shuck is the name of East Anglia’s version of the old English legend, but East Anglia is notoriously flat and I think the name “The Gateway to Hell” is decisive, suggesting Eldon Hole in the Peak Forest and the Peak District (also known as the Derbyshire Dales) more generally. This relocation of Black Shuck to one of the few regions of England that does not have its own ghost dog is the first indication of the categorical originality of Gaiman’s re-invention of the legend.

The novella opens with a play on words: the first chapter is titled “The Bar Guest” and the barghest is the name of the Yorkshire incarnation of the black dog. Gaiman very quickly provides a series of reflections on and allusions to many of the linguistic and conceptual associations with dogs that are such a prominent part of English culture: the love of dogs as pets, the eternal conflict between cats and dogs and consequent division of human beings into “cat-people” and “dog-people”, “black dog” as a description of depression (made famous by Winston Churchill), “black dog” as a favoured name for brands of ale, and the curiosity of a ghost dog that portends or causes death without possessing any corporeality. As the tale develops, he adds the conceptions of prehistoric dire wolves, Odin’s wolves (although Odin’s nemesis Fenrir seems more appropriate), and the myth of the Wild Hunt. There are also explicit references to Conan Doyle’s The Hound of the Baskervilles (1902) and, in my opinion, implicit references to Stephen Booth’s Cooper and Fry crime series, which is set in the Peak District and was initiated with the novel Black Dog (2001). The combination of these references also serves as a clue that this is as much a mystery as it is a work of speculative fiction. When compared to The Monarch of the Glen, Daniel Egnéus’ artwork reflects both the change in emphasis from fantasy to mystery and the more hospitable countryside in which Shadow finds himself, where an evening on a hilltop is an experience to be enjoyed rather than a death sentence – or should be. Egnéus’ drawings are much less visceral than those in The Monarch of the Glen and with a few exceptions evoke wonder rather than fear while nonetheless retaining a haunting quality. Like the dog itself, they are shady, shapeshifting, and surreal.

The story starts with Shadow in a public house, where there is much spooky talk of big black dogs and cats walled up in buildings. The village has no accommodation available and a local couple, Ollie and Moira, offer him a room for the night. As the three of them walk home, Ollie thinks he sees Black Shuck and falls into a narcoleptic state. This introduces the natural dimension of Gaiman’s take on the black dog, as a manifestation of depression, which grounds the narrative in reality: depressed people recognise their own despair, exemplified by the ghost dog, and either try to kill themselves or simply lose the will to live. Following this motif, Ollie self-harms as soon as he emerges from his semi-consciousness, setting the scene for Shadow remaining in the village for a few days to help Moira look after him. Whether or not I am correct in identifying Black Dog as equal parts speculative fiction and mystery, it is certainly focused on a contemporary crime rather than an ancient evil. What raises Gaiman’s contribution to the black dog legend from the original to the exceptional is the way he not only offers a rationalisation of its continued existence, but binds the supernatural explanation to its own special logic. The ghosts that inhabit this particular piece of the American Gods universe are not restricted to the canine variety and the relationship between the villain and the ghost dog and between Shadow and the benevolent ghost is explained by the metaphor of flame and moth. Human beings, warm with their life blood coursing through them, are the flames that attract the attention of moth-like ghosts, which clarifies the reciprocal relation between corporeal and non-corporeal: the moth flying too close to the flame can either extinguish that flame or be destroyed by it.
Posted by Stephen Theaker