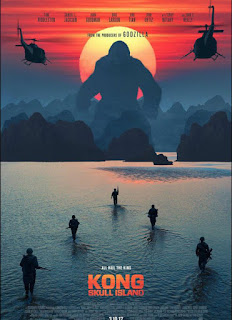 Out romance. Out cuteness. Out sentimentality. Make way for MONSTERS!

Lieutenant Hank Marlow (John C. Reilly) calls his cohorts’ attention to a chirping. He says, “That sounds like a bird, but it’s a [expletive] ant.”

That the ants in Kong: Skull Island are so large that you can hear them says something about the size of the island’s inhabitants, the biggest of which is King Kong. The famed monster has not appeared in a big budget film since Peter Jackson’s King Kong (2005). That Kong was 25 feet tall. In Kong: Skull Island, the figure resurrects at an imposing 100 feet! Marvel at Kong’s full-body profile before the setting sun. Now that is an iconic image.

Hats off to director Jordan Vogt-Roberts who, despite top-shelf acting talent such as John Goodman and Thomas Hiddleston, deemphasizes the leading lady, cuts back on romantic relationships, and makes Kong and his supporting cast of colossuses the true stars of this film.

There’s no buildup to this Kong: within the first five minutes of the film, his gargantuan (and realistic) head and hands burst onto the screen. Even if the rest of the film wasn’t graced by strong acting, a solid story, classic rock, and an ecological message, Kong: Skull Island would be entertaining.

When the group drops bombs under the guise of a geological survey, Kong swats them out of the sky. Packard assumes an Ahab-like obsession with exacting vengeance upon Kong, while most of the others just want to get off the island, which is full of threats large and larger.

Some characters recognise that they are intruders on the island and advocate a nonviolent extraction, while others, particularly Packard, approach the situation with guns blazing. Packard is angered by the Vietnam War and upset that some of his men were lost during the initial skirmish with Kong, but his bloodlust seems to extend to the island as a whole. For instance, Packard doesn’t hesitate to pick off a prehistoric-looking bird for no reason.

Comic relief comes with Hank Marlow, an inhabitant of the island since his plane crashed there during World War II. The Chicago native warns the visitors about the massive lizard-like creatures that live underground and threaten to surface and kill everything in their path. “I call them Skull Crawlers,” he says. “I never said that name out loud before. It sounds stupid now that I think about it.”

Again, though Marlow is entertaining, the most captivating players in this story are the island’s animals, ranging from massive spiders and sea creatures to truck-sized yak-like beasts and winged man-eaters.

A Message of Planetary Proportions
Typically, King Kong develops a ridiculous relationship with a damsel in distress. This Kong exhibits toward his less hostile human visitors not necessarily a soft spot, but more of a not-as-hard spot. His relationship with Mason Weaver is subtler. There are no crushes, playfulness, or snuggling. It’s a mutual respect.

The film also imparts a timely message. Kong, protector of the island and almost like a god to its inhabitants, could represent the Earth’s ecosystem. If you treat it with respect, it will support you, but if you hurt it, it might just hurt you back.

One soldier, Cole, says, “Sometimes the enemy doesn’t exist until you go looking for one.” In other words, leave it alone! Perhaps there are some places where mankind need not meddle. – Douglas J. Ogurek *****