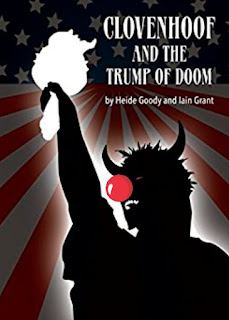 This is the latest in a series of hilarious short books about Jeremy Clovenhoof, the earthly incarnation of the devil himself, Satan! Now, you might be getting nervous, casting a concerned glance up at the crucifix hanging on your wall, worrying that this book is in some way blasphemous, but the bible doesn't mention the devil having any cloven hoofs so it's probably not the same guy. Or is it? What was the greatest trick he ever pulled, eh? We should be careful, lest we end up reading a book that leads us down the garden path. All that's waiting down there is the Cottingley fairies!

Back to the book. This is up to the minute hot off the presses satire: Nostradamus foretold the barmy presidency of Donald Trump and the barminess of Brexit. The Archangel Michael will try to undo Brexit through the power of song (though perhaps he would have been better off finding a decent candidate for leader of the Conservative party who was willing to oppose it) while Clovenhoof goes to the United States to stop Trump becoming president. You may watch the news and think, sorry, Clovenhoof, too late, but this book, published by Pigeon Park Press, gives us hope that it can still be stopped. If you believe Clovenhoof exists, it's not too hard to imagine he has time travel powers and can still undo all of this.

The book begins in Sutton Coldfield, which is a great place for a book to begin. When I was there I found the best ever discount book store, and spent about a hundred pounds buying virtually everything in the Virgin Doctor Who line that I didn't yet own, including several hardback non-fiction titles and paperbacks that have since become exceedingly rare. The shop shut down within a week or two, leaving me to wonder ever since whether it was really there. Back then the high street also had a McDonald's where I would have a cheeseburger and small fries while reading the Independent, before, in good weather, heading over to the bench by the church to read a book, or, in bad weather, going into the library to read a book.

It's terribly sad that the library is now closing, as I spent many happy pages there. If only Clovenhoof could have done something about that, as well as fixing Trump and Brexit, this superb book would have been even better, but it would be unfair to mark down an otherwise exceptional and hilarious book for something so far out of its control, so it gets a rollicking five red noses out of five from me.


NB: this is a fake internet review, written for fun without having read the book on Red Nose Day.
Posted by Stephen Theaker