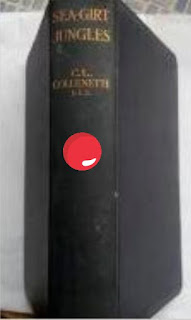 This book, subtitled The Experiences of a Naturalist with the "St. George" Expedition, was written by Cyril Leslie Collenette, a naturalist (i.e. someone who studies nature, not someone who takes their clothes off in public) who lived from 1888 to 1959, and it was published in 1926 – the year my alma mater Reading University received its charter!

It describes the highlights of an 1924 expedition that went to Madeira and Trinidad, then through the Panama Canal to some islands in the Pacific that were at the time less frequently visited. After that came the famous Galapagos Islands, the Marquesas Islands, the Tuamata Atolls, Tahiti, the Austral Islands and Rapa Nui (Easter Island). On some of these islands were the jungles of the book's title, surrounded as they were by the ocean.

Collenette was a fellow of the Entomological Society, and so his professed interest was in finding examples of butterflies, moths and beetles, though rumour has it that he also took quite an interest in a rather more sophisticated lifeform: Cynthia Longfield! She went on to a glittering career of her own, becoming known as Madam Dragonfly for her research on that creature.

The book does not mention his reaction upon returning to the United Kingdom to discover that, during his absence from these shores, the Sunday Express had become the first newspaper to publish a crossword. One is left to wonder also how he felt about the news that Eric Liddell had won the four hundred metre gold at the Paris Olympics while setting a new world record, that fridges were now on sale, that fellow explorers George Mallory and Andrew Irvine had met their doom on Mount Everest, and that the first naturist (i.e. people who take their clothes off in public, not people who study nature) camp had been established in Wickford, Essex. We can only speculate.

Collenette was known for collecting pteridophytes and spermatophytes, and went on to publish books about the Ruwemzori expeditions of 1934-1935 and 1952 as well as the H.E.K. Jordan expedition to Angola. There had been hope that the 1924 expedition would discover buried treasure, which if it had happened would have made this already brilliant book even better. It did not, but Collenette was after all more interested in the bugs than the bounty, and so this book remains a fitting legacy. It gets five red noses out of five.


NB: this is a fake internet review, written for fun on Red Nose Day, although the facts above are probably accurate. The actual book review from which many of them were taken can be read here.
Posted by Stephen Theaker