This is the Quickest Way Down by Charles Christian #rednosereviews #rednoseday 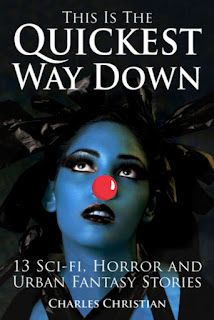 Charlie Christian was a swing and jazz guitarist who played an important role in bebop and cool jazz, and he was inducted into the Rock and Roll Hall of Fame in 1990, 48 years after his death. There is a street named after him in Oklahoma City, and he played with Count Basie and Benny Goodman, among others. He is seen as an influence on everyone from Eddie Cochran and Chuck Berry to Thelonious Monk and Miles Davis.

But this book is not by Charlie Christian, it is by Charles Christian. Whether they are related or not we can't say, but it's not hard to imagine the author of this book tapping away at his keyboard while the electric guitar of his namesake works some cool moves in the background. A book of fiction is a lot like a piece of jazz music. You might start off with a plan, you might even know every event that is going to happen, but the only way to get there from here is by improvising every word as you go along.

You may have noticed the remarkably beautiful woman on the book's cover. I know this reviewer did. While I count myself lucky to have married a brown-skinned woman, and indeed would have counted myself lucky to have married a woman of any skin colour, I must confess to a particular fondness for blue and green-skinned ladies, such as the Asari from Mass Effect, and the Orions from Star Trek. In any video game where you can create your own character, my first impulse is always to recreate my wife, since who else would I want to spend forty hours staring at on screen? But there's a good chance her skin will turn blue given the opportunity.

So the book got off to a good start with me. Then, inside, it sprinted to an amazing finish, with stories like "The End of Flight Number 505", "Confessions of a Teenage Ghost-Hunter", "A Baretta for Azraella" and "By the Steps of Villefranche Station" showing just what a short story can do, and how it can do it! There are thirteen stories in this collection, but if that's unlucky for anyone it's not the reader. This book gets five red noses out of five from me. What's more, it's available for just 99p! Just make your next Amazon order a no-rush delivery and you'll get that much back in promotional vouchers to spend on this book!

If you've ever wondered what a book of short stories written by a former practising barrister and Reuters correspondent turned technology journalist and poet would be like, wait no longer. It's right here! And it can be read on an unlimited number of Kindle devices too, with text-to-speech enabled. What more could you ask for?


NB: this is a fake internet review, written for fun without having read the book to raise money on Red Nose Day.
Posted by Stephen Theaker