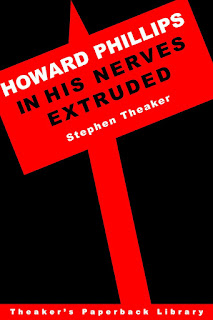 Just as time was about to run out on Red Nose Day, leaving us cruelly just short of our target of one hundred pounds, our frequent contributor Howard Phillips jumped in with a last-minute donation. So here is our last review of the day, of the three novels he has completed: His Nerves Extruded, The Doom That Came to Sea Base Delta, and The Day the Moon Wept Blood. For boring business reasons (Howard lost all copyright in his work to me in a late-night game of Adventure Time Fluxx) these were all eventually published under my name, but they are all Howard's work, unmistakably so!

His Nerves Extruded is not the first book in the series. That was The Ghastly Mountain, which was never finished. But despite that this remains a brilliant introduction…

It's one thing to write fake reviews of books that I haven't read, but I have read these Howard Phillips books, and I know how ropey they are. Can I really pretend that they're any good? He did make his donation at the last minute, and so, as I write this, it's no longer Red Nose Day, so strictly speaking I'm no longer obliged to give everything a glowing review. In fact, I think you would be disappointed if I did. So let's get back to normal:

His Nerves Extruded is a book by Howard Phillips about his own adventures, which you may or may not choose to believe. Whether it really happened or not, the way in which he parades around England with a troupe of paid palanquinettes is undeniably sexist. That the writer includes a photographer in the group and promptly forgets about his presence says a lot about how much thought went into the book. 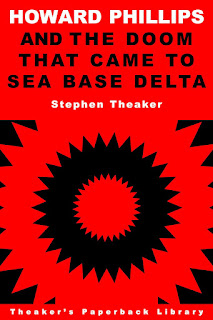 The Doom That Came to Sea Base Delta sees Howard take his meandering adventures down into an undersea base, after a baffling interlude behind the scenes of Late Night with David Letterman. The book wants to be The Thing in an underwater base, but never rises to the level of Plan 9 from Outer Space in a bucket. There's an important chapter towards the end that Howard never got around to writing.

The Day the Moon Wept Blood is perhaps the most preposterous of them all. It's all about a terrible writer (it takes one to know one!) who steals a book from the British Library and plots the assassination of the central figure in English literature, whose surprising identity I will leave readers to discover for themselves. It's clear throughout that the author made no attempt to research the book's various settings.

All three books share a level of self-indulgence that is almost impossible to credit, a belief in the power of poetry that makes a mockery of that noble art, and a tendency to skip over events because the author doesn't feel like writing them. All pretend to be true, but all were written in less than a month and it shows. Do not read these books unless you are a glutton for punishment.

I give them all one red nose to share between them.

You can buy the books here: His Nerves Extruded, The Doom That Came to Sea Base Delta, and The Day the Moon Wept Blood.


NB: this is a fake internet review, written for fun for Red Nose Day. It's our last one. Thank you to everyone who donated, helping us reach our target of £100. Not bad for a niche fundraising concept that couldn't be explained in under twenty minutes and massively limited the number of people likely to sponsor us!
Posted by Stephen Theaker