The Monarch of the Glen, by Neil Gaiman and Daniel Egnéus (Headline) | review by Rafe McGregor 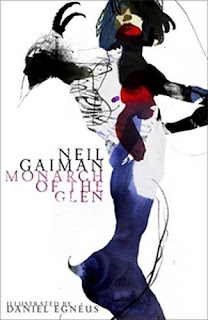 Neil Gaiman’s American Gods was first published in 2001 and then re-published in an expanded tenth anniversary edition. Remarkably, the latter – which has been available as a delightfully captivating audiobook since 2012 – is a literal “author’s cut”, i.e. Gaiman’s original novel, published without the considerable editorial redactions of the published version and therefore substantially longer (such are the perks of fame). I thought American Gods was deserving of its critical and popular success although I was disappointed that Gaiman hadn’t integrated the monotheistic religions into his universe, a strategy which was obviously expedient, but felt inconsistent. The audiobook (but not the tenth anniversary edition) contains a deleted passage in which Shadow meets Christ, offering a tantalising taste of how Gaiman might have treated the monotheistic gods (oxymoron intended), but the encounter raises more questions than it answers. As an aside on adaptations, the television series of American Gods is due for release by Fremantle Media on an unspecified date in 2017. Despite The Monarch of the Glen being marketed by Amazon as part of the “American Gods Novella” series, there is no mention of any such series from publisher Headline on or in the book itself. The narrative is indeed set in the world of American Gods and even shares the same protagonist in Shadow, but is also – as one might expect from a storyteller of Gaiman’s skill – perfectly self-contained and can be enjoyed without having read the novel.

The novella (or perhaps short story, it’s difficult to tell with all the illustrations) was first published in Legends II, a collection of speculative fiction edited by Robert Silverberg, in 2003. This version has been co-released with American Gods and Anansi Boys (first published in 2005), which is also set in the American Gods universe, as well as the other “American Gods Novella”, Black Dog, also reviewed in this issue. All four volumes are illustrated by Daniel Egnéus, who cites his influences as Arthur Rackham and Gustave Doré. He certainly displays the former’s flair for line and the latter’s ability to represent the otherworldly and there is also a strong surrealist sense of the fluidity of shape, reality, and reason in his depictions. The interior illustrations are black and white and they fully capture the darkness of both Gaiman’s setting and the subject matter of the tale that unfolds in that setting. Egnéus leaves readers in no doubt that Shadow has arrived in a vital, visceral, and volatile place where the trappings of modernity conceal an ancient and unchanged way of life. Egnéus’ work enriches rather than embellishes Gaiman’s and my one complaint is that a couple of the titles that form part of the drawings are spoilers and detract from one’s intellectual and imaginative engagement in the first instance and from the drama of the fully-realised dénouement in the second.

The narrative takes place in the north-west of the Scottish Highlands and is set two years after the conclusion of American Gods. Shadow, who may or may not be an incarnation of Baldr (or Baldur or Balder), who may or may not be a god, has spent the interim backpacking across Europe and North Africa and finds himself in an unnamed village somewhere between Thurso and Cape Wrath. The plot begins when, in quick succession, he is offered a weekend job as a bouncer at a local country house and meets an unconventional barmaid named Jennie who regales him with stories of the local lore, particularly those pertaining to the strong Norse influence in what is usually assumed to be a hyper-Celtic culture. The suspense is generated first by the mysterious party, then by its mysterious guests, and finally by the real reason for Shadow’s employment. Having uncharitably criticised Egnéus for a couple of slight spoilers, I shall be careful to avoid the same charge myself in raising my quibble with Gaiman. I am also aware how minor this point is in a work that has – words and images combined – provided me with an exceptionally rewarding reading experience and that I shall have complained that it is too revealing and too opaque, which doesn’t seem very convincing at all. The opacity is in the title. The Monarch of the Glen (1851) is a painting of a red deer stag by Edwin Landseer and has become one of the exemplary and archetypal images of the Highlands specifically and Scotland more generally. Landseer was famous for contributing to the Victorian image of an idyllic Scotland that never existed and for representing anthropomorphic animals in savage struggles for survival against one another, man, and nature. The painting itself – or rather, Landseer’s copy of his own painting – appears in the story, the property of Mr Alice, who is hosting the party. Its significance – and given the title, it must surely be significant – is never explained or even suggested and the only commentary is Alice on its popularity and Shadow’s silent appraisal of the stag as “haughty, and superior”.

My understanding of the painting’s significance in the novella is that the shared title is a reference to Shadow, who has been hired to take part in a struggle even more savage than those portrayed by Landseer. In this struggle, Shadow is the symbol of both man against monster and Scotland against its (Norse) invaders. But, just like the criticism that Landseer created a false image of Scotland, Shadow is being set up as a false symbol, one that has no basis in reality. He is, like the English Landseer in the Highlands, a foreigner, and also, as the opening dialogue of the narrative reminds readers, a monster himself – not quite a man and not quite a god. And of course Gaiman is far too sophisticated a writer to allow the simple dichotomies of man/monster, Celtic/Norse, and the relation between them to remain unchallenged. The result is that the explosive climax at the country house does not turn out as expected for any of the participants and Shadow is measured against his own judgement of Landseer’s stag. Shadow survives (no spoiler, as he will reappear in Black Dog) and the tale concludes with him on a train, heading south with the ultimate aim of bringing his wandering to an end in Chicago. The complexity of the title, the symbolism, and Shadow’s character are wonderfully intriguing and if I didn’t find the confirmation I was looking for, that may well be because my interpretation is mistaken. I shall, however, make no mistake here: this is a great novella, atmospheric and thrilling, intellectual and unpredictable.
Posted by Stephen Theaker