There Will Be Walrus: First Volume V #rednosereviews #rednoseday 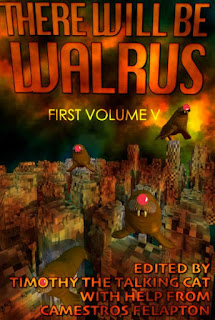 Military science fiction is a part of the genre that does not always get the attention it deserves, but thank goodness Cattimothy House is on the case, producing an anthology of stories and essays that ranks with the very best sf being produced in the world. Overrated social justice writerers such as John Scalesy and Jim B. Hinds might knock this kind of stuff and despise the fans who love it, but us real fans know the real deal when we see it, and here we do!

Like all the best books, this is edited by a gun-toting feline, in this case Timothy the Talking Cat, "one of America's foremost political philosophers and one of the aspiring leaders of the future". He has been assisted in bringing the book to publication by Camestros Felapton, and the contributors include such amazing stars in the science fiction sky as Timothy the Talking Cat, Straw Puppy, Mr Atomic, Flight Rear Admiral General Fortescue-Billinghman, Chilsed McEdifice, and the infamous Vax Doy, well known for his failed attempts to rig the Hogu Awards.

It includes five forewords, each better than the one that came before, a guide to surviving a squirrel attack, self-publishing advice for indie authors, stories with names like "Clean Up on Gamma-6-Gamma" and "Behold the Valiants" and "The Dead Tell No Secrets of the Dead", and an FAQ for those people who just stubbornly refuse to get with the program and need a handout! Online, I get the impression that some people haven't taken the book seriously, but I bet those are just omega males, or even more embarrassingly, people who aren't even male at all.

The book contains twenty-two thousand, one hundred and eighty words, which seems like just the right length. Not too short that it has finished before you get going, but not so long that you will wander off to read something less walrussy halfway through. And it's free, the best price of all, so I have no hesitation in awarding it the maximum five red noses out of five. If it doesn't win any awards that can only be down to the machinations of those evil social justice weirdo cat hating squirrel lovers.

You can get the book here.