It | review by Douglas J. Ogurek 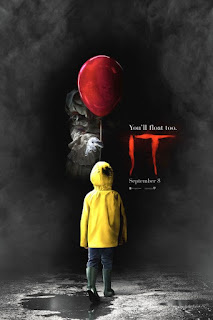 Viewer responses to the 1990 miniseries It typically evoke some variation of “not great”. So it was with much fanfare that the film version of Stephen King’s chunky 1986 novel surfaced. According to both critics and the general audiences, the film has lived up to the hype.

It does offer a brilliant portrayal of the infamous Pennywise the Dancing Clown and captures the spirit of growing up in the late eighties. However, the structural glue that holds the film together is a bit weak, and in more than one scene, the film dips into a sentimentality incompatible with modern horror masterpieces.

A year after his brother Georgie disappears, child protagonist Bill Denbrough and his outcast friends attempt to find the missing boy. As the group navigates King’s fictitious Derry, Maine, it discovers the evil responsible for the horrific incidents that assail the town every twenty-seven years.

The opening scene, in which Pennywise/It (Bill Skarsgård) lures Georgie into the sewer, is cinematic magic. Skarsgård’s nuanced delivery puts the drooling, unstable Pennywise in the same league as Heath Ledger’s Joker. With his fluctuating vocals and eye colors, Pennywise is hard to pin down. Is he a friendly clown or a diabolical fiend? One thing is certain – he is not human. Alas, this scene is arguably the best in a film that sacrifices such intimate dialogue for demented attacks. The filmmakers should have let Skarsgård talk more.

Nevertheless, most of Pennywise’s attempts to terrify the children are engaging. In one scene, he crashes a meeting in Bill’s garage using means both subtle and blatant. In another, he transforms into a headless reanimated corpse that stumblingly yet quickly chases a boy through a library.

It is also a coming-of-age story about a group of friends and the problems they face, such as parental abuse and peer bullying. The film explores the growing attraction between the stuttering Bill and Beverly Marsh, the group’s only female. The film’s most entertaining character is Richie Tozier, a potty-mouthed smart aleck whose Coke-bottle glasses exaggerate his bold and often humorous comments. Often though, the acting among the children takes a turn for the worse. The dramatic speeches don’t register and expressed grief or concern is sometimes laughable. Additionally, group hugs and holding hands in a circle seem more fitting for a kids’ movie than a horror film. And yet, these characters are kids, and nerdy kids at that.