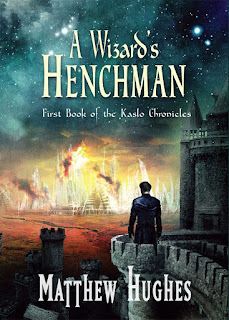 For those readers who have had the immense pleasure of reading several of this author’s Archonate books, A Wizard’s Henchman is simply unmissable. Over many short stories, novellas and novels we have been shown a universe on the point of collapse, rapidly approaching the point at which reality will flip, from being based like ours (one hopes) on scientific principles to being ruled instead by magic, or, to be more precise, by the will. Some books have shown magic bleeding through, and others have even taken us into the future for a brief glimpse of what is to come, but this is where it actually happens! It is very abrupt. Flying cars fall out of the sky. Buildings collapse. People starve. But not our protagonist. Knowing a little bit about what is going to happen, he gloms on to a promising candidate for wizardship and keeps him safe while he prepares and later learns to use his new powers. Less pleasant magic users are also making their play, and the denizens of other dimensional planes are also ready to take advantage of the new status quo. The book offers a comfortingly familiar mix of science fiction, fantasy and mystery, while never being reluctant to offer a shocking image or idea when appropriate. It gives us a protagonist for whom self-preservation is at first a priority, but who grows in stature into a true hero, in large part thanks to his determination to adapt and learn. A brilliant book, probably my favourite new book of 2016. *****
Posted by Stephen Theaker