The Complete Scarlet Traces, Volume One, by Ian Edgington and Disraeli (Rebellion) | review by Stephen Theaker 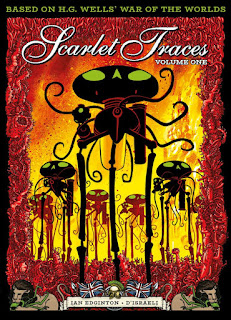 Before the films, before the games, before Richard Burton and the brilliant album, and even before the book by H.G. Wells, my first version of The War of the Worlds was a comic strip. It was introduced by Tom Baker’s head in Doctor Who Weekly, though my guess is that it was a reprint from Marvel’s Classics Illustrated. It made a real impact, and yet this adaptation (and then sequel) was even better. I’m sure all of our readers know the story already, but anyway… The astronomer Ogilvy spots great flumes spouting from Mars, just as it is at its closest point to Earth. A great cylinder falls on Horsell Common, then unscrews, and from it emerge first the Martians themselves, and then their weapons, to incinerate humans with as little thought as we would give to swiping at ants on a picnic blanket. It’s crucial for an adaptation of this story to get the horror of these scenes right, and here they are terrifying, Disraeli’s artwork capturing brilliantly the fear on the faces of all those people realising that they no longer rule the world, they no longer even rule Horsell Common. This is pretty much a perfect adaptation to comics of the novel, in my opinion. After that the book moves on to a sequel, ten years later, by the same writer and artist. Again, this is well-trodden territory, though it hasn’t always been trod with great distinction. There were books such as The Nyctalope on Mars (reviewed back in TQF31) and The Space Machine by Christopher Priest (described as dull by its own author), an awful television series, and the overwritten Marvel adventures of Killraven, born in the Martian pens. More recently, Stephen Baxter has written a sequel novel of his own, The Massacre of Mankind. The approach in Crimson Traces is to use new characters in a murder mystery story set in a Britain that has been greatly changed by the war between the worlds, the technology that was left behind by the Martian attack having been cracked open and repurposed to keep the empire running in tip-top shape. While delivering an action-packed thriller, the story also considers the results of automation without social equality. It’s a problem that is likely to only get worse for us, and there’s a warning here about how bad it could get. The sequel reminded me a bit of Bryan Talbot’s equally excellent Grandville series, as it puts some tough, likable characters up against a mystery of national importance and a bunch of vicious villains. Definitely worth your time, even if you think you’ve probably had enough of the Martians and their tripods by now. ****