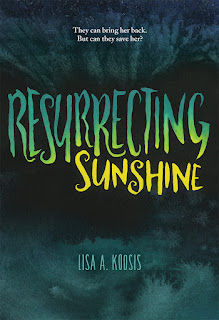 As human as it gets.

The rest of the world knew her as Sunshine but to Adam she was Marybeth, the love of his troubled adolescence. Behind the alter ego, beyond the music and the fame, Marybeth meant everything to Adam; and when Sunshine died she took Marybeth with her. Adam’s life fell apart.

But what if he could bring her back? What if his memories could help resurrect Sunshine in a clone body? He would give anything, wouldn’t he?

But will it really be Marybeth? Will having her back take the pain away?

The more Adam commits to the procedure, the more he starts to wonder if maybe Marybeth’s death came a long time before Sunshine’s…

I first happened upon Lisa A. Koosis when editing for Andromeda Spaceways. Her story “Soul Blossom” was sad and beautiful. As soon as I read it I knew hers was a name to look out for.

Resurrecting Sunshine returns to the same themes as “Soul Blossom” – loss; grief; hope beyond death – but gives them a book-length treatment, aimed at teens but no less profound in the telling. As an adult reader I found myself intrigued, drawn in and then taken by the story’s flow. (As a reviewer I’d usually try for some kind of simile at this point, but it feels wrong; Koosis’s writing calls out to stand by itself.) The novel is perfectly paced. I read it in three sittings, each longer than the last yet seeming to go faster. There was a sense of inevitability to the narrative, but not predictability. When the ending came, it brought closure.

In her acknowledgments Koosis describes Resurrecting Sunshine as “the book that would not die”. This suggests also a book that didn’t want to be born; a story that came but grudgingly into the world; and yet, whatever difficulties it posed the author, the end result is seamless. In fact, it is Koosis’s obvious investment in her work that makes it so compelling. Underlying the spec-fic “now” tale is a heartfelt backstory whose gradual emergence brings a depth of emotion so lacking in most teen novels. All the characters feel genuine. They’re not just there to tell a story; they’re living through one.

Resurrecting Sunshine is written in the present tense from a first-person male perspective. Koosis handles this well, as does she that fine balancing act between keeping the reader guessing and allowing the book to retain its integrity. Resurrecting Sunshine is a profound, beguiling debut that transcends genre to resonate with yearnings deep within. Buy it for yourself and then buy a copy for someone you love. Because this is as human as it gets…

And wouldn’t you do anything?
Posted by Stephen Theaker