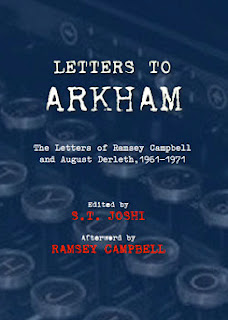 This book collects the correspondence (or so much of it as remains) from the 1960s between the prolific writer and editor August Derleth and the young Ramsey Campbell. The latter would go on to be a titan of the horror world, and the former already was, his publishing of H.P. Lovecraft’s work in hardback having done a great deal to cement that writer’s reputation. The letters are often fascinating. Campbell, fifteen at first, is importunate, full of questions – reminding us that this was a time when you couldn’t simply look things up on the internet – a virgin, somewhat testy and defensive. August Derleth, much older, is sexually omnivorous, patronising, encouraging, and exceedingly free with his opinions. One thing I had noted reading Derleth’s pastoral Sac Prairie Journal immediately before this is that August Derleth’s romantic life is completely absent from its pages, and these letters make it obvious why: he was having it off with whoever he could! Given that the letters are remarkably revealing, it’s a credit to Ramsey Campbell and to the literary estate of August Derleth that their publication was allowed. That the book would be edited by Lovecraft scholar S.T. Joshi must have helped in that regard, and he provides very useful footnotes to the letters, supplying information about everything from incorrect film titles (there is a great deal of film chat) to whether planned titles from both writers were ever published, and if so in what form and under what titles. One of their favourite topics of conversation is films, and reading the book now, when so much of cinema’s rich history is available for a few pounds and a couple of clicks, it’s almost shaming to see the lengths to which the two of them go to watch really good films, travelling for hours to get to a particular cinema on the one night that film would be shown. Since reading the book I’ve certainly been making more of an effort to watch better quality films. It’s essential reading for fans of either writer, and very interesting reading for everyone else. ****
Posted by Stephen Theaker