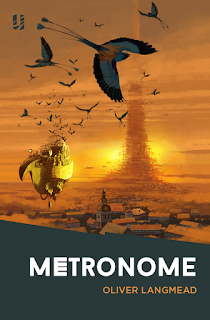 William Manderlay, an elderly man living in a care home, meets a Sleepwalker, March, a hunter of nightmares, in one of his dreams. March lends William his special dream compass, and tells him to go to the Capital of dreams, to chill out while March gets on with clearing out the bad dreams that are infesting his noggin. As well as helping him find his way, the compass can show whether people he meets in this world are other dreamers or just figments. Unfortunately, he runs into June, another Sleepwalker who wants to get to Solomon’s Eye, whatever that is, and for that purpose she needs a copy of the songs that William never got around to recording for his big hit album. They will provide her with directions. Eventually William gets involved in a rival quest, on board the Metronome, a clockwork-powered flying craft whose captain is willing to take him in pursuit of those stolen songs, because they happen to be the map to the centre of the storm where she lost the rest of her crew. This a nicely written piece of work, with plenty of ideas and a beautiful cover, but it didn’t really excite me. It feels unfair to say that I feel like I’ve read plenty of airship stories now, when I wouldn’t say the same thing about car stories or spaceship stories, but some of the beats did feel quite familiar from books like Empress of the Sun and Clementine. The portrayal of William in his old age is very touching, as his reaction to finding himself increasingly youthful again in the course of the dream quest. It was pleasant enough, and I’m sure there are people out there who will be more in tune with it than I was. ***
Posted by Stephen Theaker