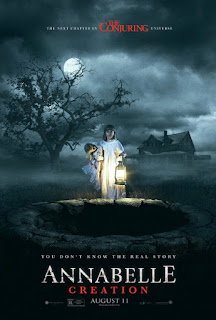 Well-choreographed scares without the long wait.

Watching Annabelle: Creation, the latest installment in The Conjuring (2013) universe, is kind of like going to an amusement park with thrill rides. While you’re waiting in line, not much is happening. These are typically the scenes in which characters are talking. But then, there are the times when you experience the exhilaration of the ride. In this film, directed by David F. Sandberg, it’s when you’re looking into a dark space, focusing on an inanimate figure, or hiding with a character as something approaches. At both the park and the theater, the overall experience depends on how long the lines are. Fortunately, unlike its immediate predecessor Annabelle (2014) and more like The Conjuring, the pre-prequel Annabelle: Creation doesn’t make one wait long to get on the rides . . . and there are quite a few.

The film takes place in the mid-1950s. Twelve years after their daughter Bee dies, doll maker Samuel Mullins (Anthony LaPaglia) and his bedridden wife Esther (Miranda Otto) allow a group of orphaned girls and Sister Charlotte (Stephanie Sigman) to take up residence in their rural home. The girls find Bee’s creepy-looking doll Annabelle, which was crafted by Samuel. The majority of Annabelle: Creation consists of the girls, especially the physically disabled Janice and her friend Linda, wandering the home and getting freaked out.

Most of the film’s attempts at character-driven drama and relationship exploration end up rather dull and clichéd. For instance, Sister Charlotte takes Janice’s confession, or Janice and Linda engage in overly mature dialogue about how they’re looking out for each other. One exception is LaPaglia’s Samuel Mullins, the tight-lipped bereaved father. In one scene, his attempt to bond with Janice shows how insensitive and volatile he is. In another, he stops outside the girls’ bedroom and, hammer in hand, stares at them for a bit too long.

But all this is no more than a means to pass from one scare scene to the next. That the entire story takes place at one homestead testifies to the filmmakers’ skills—they know how to tweak lighting, prop placement, and sound (or absence of it) to keep the viewer on edge. Though this film does not instill the lasting terror of some of the last couple decades’ scariest pictures, its abundance of jump scares may evoke more screams.

In one strong scene, Linda shoots a ball connected to a string into a dark room, then reels back the ball. Later, the camera focuses on a scarecrow with a burlap sack head while the lights slowly turn off and on. And there are plenty of lingering shots of Annabelle. She is wide-eyed, pigtailed, and rosy-cheeked. She is also wicked disturbing. – Douglas J. Ogurek ****

Read Douglas’s review of The Conjuring or The Boy (2016), another recommended film in the creepy doll subgenre.
Posted by Douglas J. Ogurek