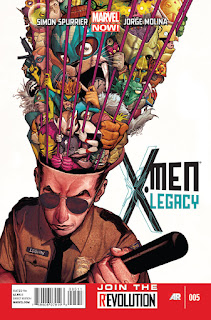 This twenty-four issue series, which ran from 2012 to 2014 and is available in its entirety to subscribers on Marvel Unlimited, as well as in four collections, tells the story of David Haller, the son of Professor Charles Xavier and an Israeli diplomat. He is known to the world at large as Legion, and though he isn’t keen on that name (he’d be really annoyed that it’s the title of the new television show based on the comic), it accurately reflects his powers: like Crazy Jane of the Doom Patrol, he has many split personalities, each of them with its own powers.

When he’s in control, he can use those powers. When they’re in control, the results can be disastrous. This series begins at the point in Avengers vs X-Men when something terrible happens to Professor Xavier at the hands of one of his friends, and that totally shatters David’s control, as well as giving rise to a malignant and powerful new personality that resembles his father. Over the course of the comic David will try to re-establish control of his own mind, take a pre-emptive approach to mutant hate crimes, start astral dating Blindfold of the X-Men, and try to prevent an apocalyptic prophecy of his future from coming true.

It’s interesting to see Marvel trying something like this. It is a bit like the original Vertigo comics – Shade the Changing Man, say – both in tone, and style, and in that a lot of the stories stem from David’s own problems in keeping his powers in check; if he’s not the big bad in each story, there’s always the danger that he might be. The television programme will probably need to be less all about him, but it worked well for the comic. ***