I Am Providence, by Nick Mamatas (Night Shade Books) | review by Stephen Theaker 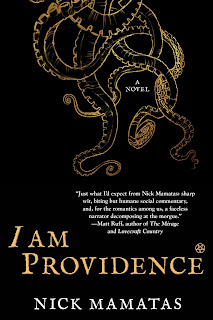 A horror book, or maybe literary horror fantasy. Lovecraftian fans, critics and writers gather in Providence, Rhode Island, at a hotel for a convention, the Summer Tentacular. To me it sounded very reminiscent of the first FantasyCons I attended (i.e. lots of blokes, lots of names familiar from the internet, and lots of people trying to sell their books; here, we almost immediately meet a chap hawking Madness of the Death Sun – which sounds great), while to newcomer Colleen Danzig it resembles a large Alcoholics Anonymous meeting, “except instead of alcoholism the attendees had all sorts of other, subtler problems”. Some of those people feel very familiar, but even if you aren’t well enough acquainted with that particular scene to identify the people being parodied, you get the gist of why someone would want to parody them. We have two point of view characters – Panossian, an older writer who gets himself murdered, and Colleen, who wants to investigate his murder – and chapters alternate between them. The dead (or “posthumously conscious” as he puts it) man tells his story in the first person, and his view of this environment soured long before he was killed there. Fandom is the social network of last resort, he says. Lovecraftians are a bunch of misfits and social defectives. Literary critics and fans are two of the more ridiculous sets of people in the world. Ambition is a hell. And he admits to having been a jerk to a lot of people – a lot of very mentally unstable people. Asked for his thoughts on writing, his answer is, “Generally, I’m against it.” He’s rather brilliant and very entertaining, much like the book itself. ****
Posted by Stephen Theaker