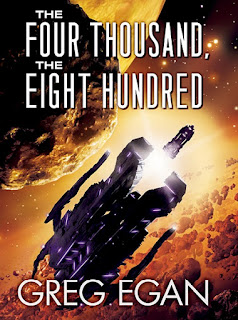 In this tense science fiction novella, there is strife on Vesta. Back when the colony was first being established, each of the founding families contributed different resources. Problem is, attitudes to private ownership of intellectual property have changed so much since then that the family that bought into the project with its patents and inventions is now regarded by some as having stolen its share, and a proposal to have them pay it back is, unthinkably, passed, with 52% voting in favour. Some put up with this discrimination, some decide to fight back, and some flee, either in passenger ships, or if the security forces are after them, via a space age underground railroad to Ceres, drugged, half-frozen, and hitching a ride on a rock slab. All of this will put Anna, only a week or so into her new job, in an impossible position, when a cruiser, the Arcas, is sent in pursuit of fugitives. It feels like a long short story rather than a short novel, but I enjoyed it very much, and it is of course remarkably topical, in that we too are experiencing what happens when a substantial minority of the populace is railroaded by a narrow popular vote rooted in prejudice and selfishness and hatred. The book does a terrific job of showing how that can happen, and how shocking it can be when it does. ***
Posted by Stephen Theaker