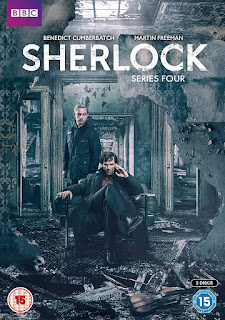 Like Conan Doyle, who famously tired of his creation, the BBC seem curiously reluctant to represent Sherlock Holmes on the small screen. Compare Sherlock, which began in 2010, with CBS’s Elementary, which began in 2012: the former has a total of thirteen episodes across four seasons (I’ll use the American term to distinguish an individual season from the series as a whole); the latter is, at the time of writing, in its fifth season and will have aired a total of 109 episodes by the time this review is in print. In addition to the British tendency to disguise mini-series as series, writers Mark Gatiss and Steven Moffat seem intent on frustrating our enjoyment of the Benedict Cumberbatch (Holmes) and Martin Freeman (Watson) partnership in a way that Robert Doherty does not with Jonny Lee Miller (Holmes) and Lucy Liu (Watson) in Elementary. Season 1 ended with Holmes and Watson about to blow up, season 2 with Holmes’ faked suicide leaving Watson bereft, and season 3 with Holmes exiled to certain death. Ominously, the final episode of season 4 is called “The Final Problem” and it is telling that Doyle’s story of the same name – his half-hearted attempt to kill off Holmes after 26 episodes – is the only original case to have inspired two of the TV adaptations.

In my review of Sherlock: The Abominable Bride (the 2016 Special, which bridged the gap between seasons 3 and 4) in TQF55, I was clear that the conclusion of Holmes’ drug-fuelled investigation is that, whatever appearances to the contrary, Moriarty is dead. I’m pleased to say I was right. Moriarty is dead and he did commit suicide in the finale of season 2, “The Reichenbach Fall”. Season 3 was Moriarty-free and the overarching plot across the three episodes was the discovery of the real identity of Mary Morstan (Amanda Abbington), whom Watson married in “The Sign of Three”, interwoven with Holmes’ struggle against Charles Augustus Magnussen (Lars Mikkelsen), a very nasty blackmailer of people in high and low places. The third season ended with “His Last Vow” (based on the Conan Doyle story “Charles Augustus Milverton” rather than “His Last Bow” as the title suggests), where Holmes was sent on a suicide mission to Eastern Europe in lieu of standing trial for the murder of Magnussen. The episode finished with Moriarty (Andrew Scott) apparently returning from the dead, being broadcast on every television screen in the UK and asking “Did you miss me?” The Special began with Holmes being recalled only a few minutes after his exile and its purpose was to confirm Moriarty’s death and establish his revenge as posthumous. Most of the Special takes place inside Holmes’ Mind Palace (AKA his drug-addled brain for this case) so the time elapsed between the end of season 3 and the start of season 4 is a matter of days rather than the three years the tormented audience has had to wait. Once Holmes reassures the authorities that Moriarty is dead, his murder of Magnussen is covered up, and he is reinstalled in Baker Street to await the unfolding of Moriarty’s retribution.

The three episodes in the season all take their titles from original stories – “The Six Thatchers” (“The Six Napoleons”), “The Lying Detective” (“The Dying Detective”) and “The Final Problem” – and succeed in both paying homage to them and creatively reinventing them for viewers who have and have not read them. Following the segue from the Special to season 4, “The Six Thatchers” sees Moriarty’s machinations fade into the background as a link emerges between two of Holmes’ new cases. The focus of the episode is actually Mary’s past catching up with her (she was a freelance military contractor who worked for the CIA and the British government amongst others). Mary decides to leave John and their child for safety’s sake and is persuaded to return by Holmes. The episode ends with Watson blaming Holmes for the consequences and demanding that he never darken his door again. Watson’s reaction is completely unfair, but provides the writers with an opportunity to deprive audiences of the beloved partnership without the threat of death to one or both of them (par for the course by now).

The series as a whole has been a mix of crime, fantasy, horror, and humour, but took a sinister turn after the confrontation with a really unsettling villain in Magnussen. The events of the first episode and the Holmes-Watson rift that results set an even grimmer tone for “The Lying Detective”. The villain of the piece, millionaire entrepreneur and philanthropist Culverton Smith (Toby Jones, whose performance inspires a perfectly-pitched combination of fear and disgust) makes Magnussen pale in comparison. In fact, after Magnussen and Smith one begins to wonder what all the fuss about Moriarty was. The case becomes a descent into hell for Holmes and his return to excessive drug use following Watson’s departure is employed as a device to blur the line between reality and hallucination, giving the story a surreal edge that marks the change from fantasy to horror for the last two episodes of the season. I was completely gripped and saw the episode as the highlight of season 4, although I wasn’t surprised to see it was the least popular – it is very dark in tone and Toby Jones’ Smith may be too much for many viewers. I do wonder, however, if Holmes’ drug addiction hasn’t become definitive of the character in a way that marks a complete departure from the original. Holmes’ occasional use of cocaine and morphine were only mentioned a handful of times by Doyle and were indicative of his desire for mental stimulation rather than addiction. They were also introduced at a time when both drugs could be bought over the counter in department stores. In contrast, Miller’s Holmes is a recovering heroin addict and Cumberbatch’s Holmes an addict in denial. I also wonder if Cumberbatch’s Holmes doesn’t glamorise drug abuse. Unlike Miller, whose day-to-day battle with heroin makes his life more-than-miserable, Cumberbatch emerges from his binges with barely a hair out of place.

“The Lying Detective” ends with the revelation that the third Holmes child, to which there has been previous allusion, is a sister rather than a brother and that she – Eurus (Sian Brooke) – is the instrument of Moriarty’s revenge. “The Final Problem” sees Holmes and Watson not only reunited, but joined by Mycroft (writer Mark Gatiss) in a Freudian excavation of the shared childhood traumas of the Holmeses. Eurus is a psychopath who shares the superhuman skills of her brothers and has spent most of her adult life in a maximum security prison on an island off the English coast. Mycroft allowed Moriarty to meet Eurus and when Holmes and Watson arrive on the island they find the tables turned and the inmate running the asylum. Eurus sets the brothers, Watson, and the prison governor a series of tasks to achieve in order to survive and the narrative is nothing short of harrowing, maintaining the grim atmosphere of the previous episode. The plot is quite similar to the final episode of season 1, “The Great Game”, but this is to be expected given that both involve Moriarty’s prolonged torture of Holmes. As there is currently much speculation about a fifth season it is no spoiler to say that the episode (and season and probably series as well) ends with Holmes and Watson back in practice in Baker Street.

There is no little irony here. Holmes is now free of the three supervillains that have dominated each season and he and Watson can, well, just get on with solving crimes and stuff (plus a bit of child-rearing, let’s not forget baby-Watson). Indeed, the ending is reminiscent of the first story in The Return of Sherlock Holmes, “The Empty House”, which sees a miraculously resurrected Holmes and conveniently widowed Watson set up shop once again, ready to resume business for another 33 episodes over the next 24 years. In a strange way, then, Sherlock ends where Elementary begins. The American series has been far less concerned with overarching plots and links between episodes than the British one and this, combined with the American focus on crime rather than fantasy or horror, has made it more rather than less faithful to the original stories, despite appearances to the contrary. Given the predilection of Gatiss and Moffat for frustrating the desires they have stimulated, I feel I can almost guarantee that the only season that does not end with the Cumberbatch-Freeman partnership teetering on the brink will be the last. At least there are 25 episodes of season 5 of Elementary to ease my withdrawal…
Posted by Stephen Theaker