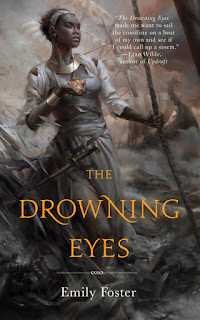 The Windspeakers, weird weather wizards who have their eyes replaced with stones in order to gain control of their powers, have been attacked by the marauding Dragon Ships, and the seas are no longer safe. This means less work for sailors, since no one wants to travel. Chaqal, Tazir and Kodin, who sail on the good ship Giggling Goat, have found a job: Shina, a rich young woman who seems to be on the run from her family. They might be overcharging for their services, but she has secrets of her own, and they are all going to get in much more trouble than expected. Being a fan of short books in general, I like the Tor.com series of ebook novellas, not least for their diversity and for having original artwork on the covers (Cynthia Sheppard provides the art for this one), and this is another fine example. It does feel like more of a novella than a short novel, covering for the main part just one journey, though it is an important one with serious consequences for their passenger. The ebook has a slightly annoying quirk – at least on Kindle, each incidence of italics is followed by a line break – but that wasn’t anywhere near enough to spoil my enjoyment of a very entertaining book about a dashing group of characters. ***
Posted by Stephen Theaker