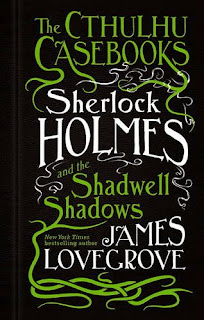 I’ve recently made several comments on the evolution of Sherlock Holmes from the cold criminal investigator who calmly rejected supernatural explanations of even the most outré circumstances created by Conan Doyle to a character who is probably most accurately called an occult detective in the twenty-first century. In my review of Sherlock: The Abominable Bride in TQF55, I mentioned that Holmes and several others who cross the threshold of 221b Baker Street are more akin to superheroes and supervillains, giving the series very much of a fantasy feel, and Guy Ritchie’s Sherlock Holmes: Game of Shadows (2011) was served with a deliciously strong steampunk sauce. I recently responded to an article in The Conversation on the decline in the popularity of Doctor Who by noting that Doctor Who and Sherlock have become increasingly close in the last couple of decades and Steven Moffat is one of many writers who have written either official novels or screenplays for both the doctor and the detective. In my review of Simon Kurt Unsworth’s The Devil’s Detective in TQF56, I mentioned “the many failed and few successful attempts to combine Sherlock Holmes and the Cthulhu Mythos” of late, and the subject of this review is James Lovegrove’s contribution to precisely that subgenre – a contribution that is by and large successful. The subgenre was launched with Michael Reeves and John Pelan’s Shadows Over Baker Street: New Tales of Terror! in 2003. Re-reading my somewhat scathing review in TQF24, I stand by most of what I wrote (though not my dismissal of Neil Gaiman’s “A Study in Emerald”). One of my main criticisms of this volume was that there had been little or no effort to recreate the atmosphere of Victorian or Edwardian London in most of the stories. The shadows are, after all, over Baker Street, not Angell Street or Clinton Street. James Lovegrove’s shadows are, as his title suggests, in Shadwell (the district between Whitechapel and Limehouse), and he has paid close attention to both the historical setting and the original Holmes stories such that the few anachronistic turns of phrase he uses are insufficient to distract the reader. It’s the relationship between old and new where Lovegrove’s contribution to literary pastiche is revealed at its most ambitious and most promising.

His intention is that the three volumes of which this is the first will “effectively rewrite the Holmes canon”, peeling back the illusion of detection to reveal the reality of the Mythos. As such, Sherlock Holmes and the Shadwell Shadows begins in a similar manner to A Study in Scarlet, with Watson returning from Afghanistan with more mental than physical damage and meeting Holmes through Stamford. The location is not the Long Bar of the Criterion, however, but an unnamed public house in Limehouse which is a haven for illegal gambling, bare-knuckle boxing, cock-fighting, and prostitution. Holmes and Watson meet by making independent attempts to assist Stamford when he falls foul of a pimp and his henchman. Stamford flees in the ensuing fracas and it emerges that he is an opium addict and a suspect in a series of murders. The murders have been linked by Holmes but not Scotland Yard in that the victims are all of the unlikely-to-be-missed (in Victorian England) variety and appear to have been starved to death. Stamford quickly removes himself from play – after being found wandering the streets while raving about the Old Ones – committing suicide in a particularly gruesome manner. Lovegrove’s writing is crisp and clean, lacking the laboured quality characteristic of so much pastiche and the narrative is fast-paced, more of a thriller than a mystery, but none the worse for it. Indeed, Lovegrove’s Holmes and Watson are somewhat reminiscent of Ritchie’s and his portrayal of Watson as a physically adept ex-soldier is particularly pleasing. The trail of the case quickly leads to Stamford’s employer, a Chinese immigrant by the name of Gong-Fen who runs an opium empire in Limehouse. At Gong-Fen’s bidding and under the influence of a cocktail of narcotics, Holmes undertakes a dream-quest where the existence of the world of the Elder Gods and Outer Gods is revealed to him. On his return to Baker Street, Watson discloses the truth of his experiences in Afghanistan and the cause of his wound. At the mid-point in the narrative, Gong-Fen, Holmes, and Watson are attacked by what appears to be the shadows of the title. This unequivocal manifestation of the supernatural in the present of the story, which is both gripping and otherworldly, marks the point of no return from crime to horror. The incident takes Holmes and Watson to the second layer of the puzzle, Gong-Fen’s employer, whom they find following researches at the British Library, and thence to the Mythos itself, with a climactic battle underneath St Paul’s Church in Shadwell.

My only real criticism comes compliments of Lovegrove himself. The novel is preceded by both an author’s preface (where he employs a conceit based on the similarity of his own surname to Lovecraft’s) and a fictional foreword by Watson and concludes with a brief epilogue in which Watson, writing in 1928, provides a teaser for the next instalment (due for publication in November this year), Sherlock Holmes and the Miskatonic Monstrosities. The first novel is set in 1880, the second in 1895, and the third (Sherlock Holmes and the Sussex Sea Devils, due for publication in 2018) in 1910. If Lovegrove is indeed reinventing Doyle’s canon – and I think reinvention is the key to successful pastiche – then he needs to do a little more than rewrite the meeting of Holmes and Watson. Given that this volume is supposed to tide us over until 1895, it covers the first two novellas and the first two collections of short stories but alludes to very few of the incidents or characters with which readers are familiar. Lovegrove has Watson explain that he wrote “one sort of story [detection] to deflect attention from another [horror], which strays into realms most ordinary people are incognisant of and are all the better off in their ignorance”. Granted, but if the canon is being rewritten as opposed to Holmes and Watson simply undertaking an alternative set of adventures, then there needs to be a little more explanation or demonstration of the relation between Lovegrove’s reinvention and Doyle’s canon. Why, for example, did Watson write the particular stories that comprise The Adventures of Sherlock Holmes and The Memoirs of Sherlock Holmes rather than others? What happened in the reality of the Mythos that caused him to draw this particular veil of detection over it? If it weren’t for Lovegrove’s preface, this expectation would not exist, but it does exist and remains unrewarded at this point in the trilogy. Notwithstanding, the novel is an entertaining and accomplished contribution to the occult detective genre and an original and ambitious contribution to the Holmes and Mythos subgenre.
Posted by Stephen Theaker