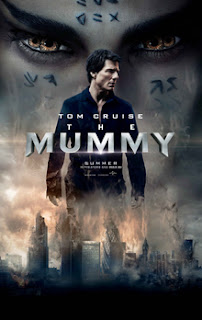 Just leave your brain at the door and enjoy it.

When Tom Cruise takes on a role, no matter what it is, he’s going to put his all into it—his characters are believable. In less capable hands, The Mummy, directed by Alex Kurtzman, could have been lifeless. Instead, we get a likable protagonist who smiles and sprints his way through (as Cruise so often does) a solid action film wrapped in all the creepy-crawlies, monsters, grand displays of destruction, and narrow escapes for which the most entertaining entries in the Mummy canon are known.

Adventure-seeking American soldier Nick Morton (Cruise) has a weakness for treasure hunting. He has zero interest in the cultural/historical value of the “antiquities” he seeks. So when he and fellow soldier Chris Vail (Jake Johnson) unwittingly discover the crypt of mummified Egyptian princess/murderess Ahmanet (Sofia Boutella) in northern Iraq, they’re only interested in the valuables that surround it. But bossy archeologist Dr Jenny Halsey (Annabelle Wallis), a sexual conquest of Morton’s, understands the momentousness of the find. Alas, the crypt isn’t so much a burial site as it is a prison for Ahmanet, who made a pact with Egyptian god of disorder and violence Set, then killed her entire family so that she would gain power. Nice lady. The trio sets out to move the mummy to London. Mistake. Ahmanet chooses Morton to be the vessel for the return of Set, with whom she will take over the world.

Morton and Halsey, in their quest to stop Ahmanet—Morton refers to her as “the chick in the box”—confront a series of challenges ranging from an underwater chase featuring the reanimated corpses of Crusaders to a massive sandstorm in the middle of modern-day London. Morton also deals with an internal struggle—is he a completely self-absorbed a-hole or is he willing to make sacrifices for Halsey and others?

Russell Crowe’s professorial Dr Jekyll brings an amusingly unnecessary element to the film. Not only does Jekyll inject himself with a giant hypodermic to keep his monster at bay, but he also makes certain to show everyone in the room. The critics scoff, but the aficionados of grandiosity rejoice. And though this Jekyll has vowed to protect the world by eliminating evil, we all know he has a dark side. This is the type of film that demands it comes out.

To those who were disappointed in the film, one must ask—what did you expect? An Oscar-worthy drama? A groundbreaking fantasy film? What I expected was action, silliness, and the Cruise charisma. And that’s what I got. – Douglas J. Ogurek ****