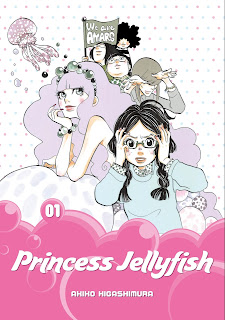 This 388pp manga collects episodes one to twelve in the story of an unhappily single Japanese woman, Tsukimi, and the geeky friends with whom she lives, and how her life changes completely when she meets a very glamorous young man. It’s rather like The Big Bang Theory in reverse. She calls herself a fujoshi, which means (rather nastily) rotten woman – a woman who follows her enthusiasms rather than trying to fulfil her expected role as a mother or wife. There’s no magical or fantastical element in this book, it turned out; it’s called Princess Jellyfish because she is a jellyfish geek (a phase the author talks about going through herself in the biographical comments). That’s what gets her talking to her gorgeous new friend: he brings his stylishness to bear in helping her save a dying jellyfish in a pet shop, just as later he will try to save Tsukimi and her friends from losing their home to property development. He’s the first boy she’s talked to since elementary school, and what gets her over that barrier at first is that she doesn’t realise he’s a boy: he likes to dress as a girl. It’s a sweet and romantic comic, with an adorable lead character and likeable love interests, and it’s an eye-opening portrayal of gender fluidity in Japanese culture. The backgrounds are sketchy, but the character artwork is highly expressive . Unfortunately, at the publisher’s choice, this Comixology edition can only be viewed a full page at a time (described as “Manga Fixed Format”). Not a problem on a tablet, but you’d struggle to read it on your phone. ***
Posted by Stephen Theaker