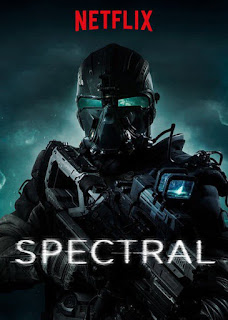 James Badge Dale (24, The Pacific) here plays Clyne, a character quite similar to the chap he played in the underwatched spy show Rubicon. There he was an extremely intelligent analyst who grew concerned about the patterns he was beginning to see, and he stayed for the most part in his office. Here, on the other hand, he is an extremely intelligent engineer who gets pulled away from his usual work at a DARPA lab to address a problem in the field. There is a civil war in Moldova, at some point in what appears to be the near future, and American peacekeepers on the ground have been seeing things through the special goggles he created: spectral things. And now the things have started to kill, leaving victims flash frozen. Once there, he meets CIA analyst Emily Mortimer and chap in charge Bruce Greenwood, and applies himself to the job. He confirms that whatever they are, they aren’t glitches in his goggles, just in time for a massive surge in their numbers. As the city falls to their attack, Clyne must work with the surviving troops to track the spectrals to their source. This is a really good little film, with an excellent cast, sort of what you might expect the Syfy channel to produce if they weren’t pumping out deliberate rubbish (enjoyable as that can sometimes be). It’s directed very nicely by Nic Mathieu, and could easily have justified itself as a cinema release, although you know that if it had been, bigger stars would probably have been cast, their pay packets requiring the movie to be more of a traditional blockbuster, and it wouldn’t have been the same. It never feels cheap (it feels not unlike a big budget Asian film), the spectrals have a interesting origin, and James Badge Dale makes a very likeable lead. It’s great that the economics of Netflix made a film like this possible, and I hope there’s more of the kind to come. ***
Posted by Stephen Theaker