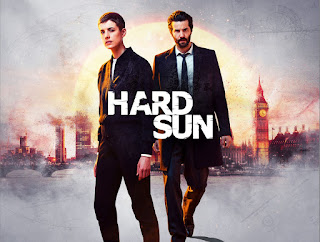 Policing the End of the World.

Hard Sun is written by Neil Cross, who is best known for his creation of Luther, the gritty British detective series that was first released in 2010 and is currently scheduled for a fifth season. (I should perhaps point out to readers outside the UK that many British series are in fact mini-series and the longest season of Luther was six episodes.) Cross’s television work includes episodes of Spooks and Dr Who, as well as the adaptation of the M.R. James short story, “‘Oh, Whistle, and I'll Come to You, My Lad’”, first published in 1904 and screened as Whistle and I’ll Come to You in the BBC’s A Ghost Story for Christmas series in 2010. He has also written for film and had one of his novels – Mr In-Between (1998) – released as a film in 2001. This film was both Paul Sarossy’s directorial debut and directorial swansong, but was in my opinion highly underrated (along with the novel) and was what first drew Cross to my attention. I mention Mr In-Between because it provided a clear but complex exploration of existential themes – abandonment, angst, authenticity, alienation, and absurdity – which return to take centre stage in Hard Sun.

The first episode introduces the two protagonists, Detective Inspector Elaine Renko (played by Agyness Deyn, a highly successful model who has been acting since Clash of the Titans in 2010) and Detective Chief Inspector Charlie Hicks (played by Jim Sturgess, best known for his role in Cloud Atlas in 2012), both of London’s Metropolitan Police Service. Renko is a newcomer to Hicks’ major investigation team, taking over after his previous deputy’s murder. Their first case together is the suspicious suicide of a hacker, who appears to have gained access to GCHQ’s network (Government Communications Headquarters is the UK’s equivalent of the National Security Agency in the US). Renko and Hicks follow another hacker to a meeting with a media magnate and intervene when the sale of a flash drive turns violent. They arrest both men and are en route to the police station when all four of them are attacked by an MI5 death squad (MI5 is the UK’s Security Service). They escape and the premise for the rest of the series is set up when the flash drive is revealed to contain information about Hard Sun, an “extinction event” involving an explosion of or emission from the sun that is due to occur in five years. Renko’s response to acquiring the knowledge is to go public in order to guarantee her safety while Hicks opts to cooperate with Grace Morrigan (played by Nikki Amuka-Bird, a familiar face on the UK small screen, particularly for her part in Luther), the sinister MI5 intelligence officer who emerges as the narrative’s antagonist. The conflict between Renko and Hicks is exacerbated when the former is found to be investigating the latter, who is not only corrupt but suspected of having murdered his deputy, and when Morrigan attempts to manipulate the latter to kill the former. Both detectives are vulnerable in virtue of their families: Hicks has a pregnant wife and a step-daughter he wants to adopt and Renko was raped when she was fourteen and has a mentally ill teenage son who is in a (not-so-)secure unit after attempting to murder her.

The Renko-Hicks-Morrigan triangle in the shadow of Hard Sun provides the backdrop for the rest of the series: the government and the media quickly represent Hard Sun as a conspiracy theory, along faked moon landings lines, and the plot involves Morrigan’s attempts to recover both the flash drive and a recorded video broadcast from Renko. At the thematic level, Renko, Hicks and Morrigan’s responses to Hard Sun are used to examine ethical questions about action and responsibility in the face of what existentialists would call the ultimate boundary situation – not just death in the face of contingency, but the death of the entire species (and consequently, for most philosophers within this tradition, the end of all values). Does the end of the world mean anything goes because nothing matters anymore? Or do our actions matter more because there is less time in which to undo harm or seek redemption? Each episode provides a case to solve within this context: a spree killer (episode 2), a lone wolf Hard Sun terrorist (episodes 3 and 4), a domestic murder (episode 5), and a serial abductor cultist (episode 6). There is a sense of absurdity in that Renko and Hicks are for the most part investigating crimes committed by “truthers” (people who believe in a conspiracy theory) whose views are actually true (because Hard Sun is real), but held for the wrong reasons (because they are obsessed or trying to justify their desire to harm others) – and that Renko and Hicks are two of a very small group of people who know that the truthers' claims are correct.

This brief plot outline reveals the main flaw in the series, that what makes it most compelling at the start – the human species' response to the impending apocalypse – quickly fades into the background. The narrative becomes episodic at the expense of cohesion to the extent that it has a disjointed, directionless feel by episode 4. There are also minor irritations. Despite being a detective inspector in prestigious investigation unit, Renko treats every day of the week as dress-down Friday and even though she is deadly with her extendable baton and brass knuckles (as Hicks and several others discover to their detriment) it’s implausible that the chief wouldn’t have told her to stop wearing her anorak to work. In his portrayal of Hicks, Sturgess is a little too breathless too often for my taste and seems to rely on whispering for gravitas. Finally, I would like to have seen more of Amuka-Bird, but just as Morrigan is emerging as a more complex character the series crashes to its climactic conclusion. The few reviews of Hard Sun that I’ve seen so far have all been poor and it looks like this is going to be a repeat of Mr In-Between for Cross: underrated and unappreciated but well worth seeing. I was very close to awarding four stars because episode 5 is particularly gripping and episode 6 makes particularly effective use of a trope from hardboiled detective and police procedural narratives when the protagonists stop working against one another, join forces, and turn the tables on the antagonist(s). The problems are that there isn’t enough of a narrative bridge to connect the striking start to the exciting end and I’m still not sure whether Hard Sun is the motor that drives the plot or a setting that links a series of subplots. ***
Posted by Rafe McGregor