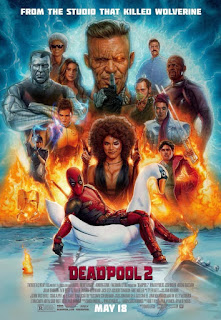 I’m getting a little tired of superhero movies. Aren’t you? They’re starting to blend together, and they’re taking themselves too seriously. Thankfully, Wade Wilson/Deadpool (Ryan Reynolds) has returned to commiserate with us in Deadpool 2, directed by David Leitch. This time, the even more reckless antihero strives to prevent abused fourteen-year-old mutant Russell/Firefists from harming humans. The quick-witted, potty-mouthed and in some ways self-absorbed Deadpool delivers a barrage of pop culture quips and ultra-violent dispatches of scumbags.

If one were to make a drinking game based on Deadpool’s pop culture references, one would quickly be inebriated. References to films alone range from eighties action flicks and rom-coms to extreme horror to Avengers: Infinity War, released less than two weeks before Deadpool 2. Add to that drinking game decapitations, severed limbs, bullet holes and stabbings, and the player would be unconscious within the first fifteen minutes of the film.

Deadpool is the kick in the pants that the superhero subgenre brought on itself. Early in the film, he wears an eighties-style, high-cut yellow jersey emblazoned with an “X” as he accompanies a few X-Men to calm down an enraged mutant. Not only does he make jabs at other superheroes – he even signs “Ryan Reynolds” on a kid’s cereal box depicting Hugh Jackman as Wolverine – but he also mocks genre conventions by pointing out what’s going to happen. Before a massacre accompanied by a Dolly Parton song, he says, “Hit it, Dolly.” He also points out a “huge, steaming ball of foreshadowing” and a “big CGI fight comin’ up”.

Deadpool’s chief nemesis is Cable (Josh Brolin), a “grumpy old fucker with a Winter Soldier arm” (referencing the second Captain America film). With his gruff demeanour and clipped dialogue, the time-travelling ruffian makes a stark contrast to Deadpool. The latter claims that he once had a fanny pack like Cable’s (carrying case) in “nineteen ninety-never” and repeatedly (and unjustifiably) calls the cyborg a racist. However, the two characters also have something in common.

The film achieves its humour in large part via foiled plans, gory injuries, and the insertion of a ridiculous element into an otherwise commonplace scene. For instance, Deadpool assembles a ragtag group of superheroes with odd powers and gives them the uninventive name “X-Force”. What happens during their first mission arguably takes the crown for the film’s funniest sequence.

Whether he’s commenting on people’s lips, sustaining a gruesome injury, or planning a mission on a map that looks like it’s been drawn by a child, Deadpool is the perfect entertainer for a restless, information-overloaded society. The only concern is that the film’s abundance of contemporary references poses the risk of giving it a short shelf life. Regardless, Deadpool’s greatest accomplishment is his ability to appeal to the nerds who live and breathe comics, and to the general public.

When interviewing potential X-Force members, Deadpool encounters one gentleman, Peter, who confesses he has no superpower, but rather “just saw the ad”. The response that Deadpool gives speaks not just to Peter, but to all theatregoers: “You’re in.”
– Douglas J. Ogurek *****