The Shape of Water | review by Rafe McGregor

Black Lagoon to Baltimore via the New Weird. 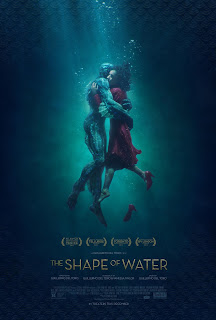 The Shape of Water, which was released in December 2017, received thirteen nominations for the 2018 Academy Awards – more than any other film – and won four, including Best Picture and Best Director. The film was conceived by Guillermo del Toro, who co-authored both the screenplay (with Vanessa Taylor) and the novel (with Daniel Kraus). The latter was released in March this year and publisher Macmillan are clear that it is not a novelisation, but a project that “has been developed from the ground up as a bold two-tiered release – one story interpreted by two artists in the independent mediums of film and literature.” I am not entirely convinced by this denial, having found the work lacking in the characteristics I associate with literature. The book should also not be confused with Andrea Camilleri’s 1994 Italian novel of the same name, La forma dell'acqua, which inaugurated the popular Inspector Montalbano detective series, was translated into English in 2002, and appeared on UK television screens in 2012. To return to the film, Del Toro’s premise picks up where an alternative Creature from the Black Lagoon (1954, directed by Jack Arnold) might have left off, with the merman or piscine humanoid captured rather than killed.

In the now cult classic horror movie, white men with guns plunder the deepest, darkest Amazon for first fossils and then the Gill-man who inhabits the lagoon of the title. It’s not quite clear how steaming upriver – away from the sea – brings the intrepid heroes to a saltwater lagoon, but perhaps we shouldn’t pull at that thread too hard. The white men with guns have thoughtfully brought along some brown men to feed to the monster and a white woman to feed to the audience’s appetite for eye candy (many swimsuit scenes) and ear candy (much high-pitched screaming). Despite the offensive stereotypes and poor special effects, the film is surprisingly strong in some of its storytelling. The use of a webbed, clawed hand as the monster’s motif was no doubt sinister at the time of release and the underwater cinematography is both functionally and formally effective, bringing a level of supra-human grace and power to the Gill-man in the water that stands in stark contrast to the actor staggering around in an oversized rubber suit on land. The narrative is also tautly constructed and cultivated, pushing the plot forward at a compelling pace without detracting from the portentous atmosphere. The first half of the film involves the discovery of the Gill-man, which produces a conflict between Dr David Reed (played by Richard Carlson), who wants to study it, and Dr Mark Williams (played by Richard Denning), who wants to kill it. Williams wins out and the ichthyologists hunt the Gill-man before it manages to turn the tables on them. Had Reed won the battle of wills, one could imagine (bearing in mind that the film is set at a time when Cold War tensions were escalating rapidly) that the United States (and Soviet Union) would very quickly have become interested in the military potential of the creature – as a weapon, as a subject of research for nuclear survival, or as an asset in the Space Race. 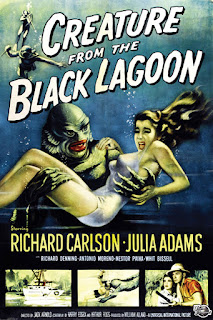 This is precisely what has happened in The Shape of Water, which jumps to the early nineteen sixties, with the Amphibian Man captured, imprisoned in an aquatic coffin, and transported from the Amazon to Baltimore for observation, study, and – ultimately – vivisection. The asset – as he is for the most part called – is played by Doug Jones (in his sixth collaboration with Del Toro) and is cast almost exactly in the image of the Gill-man, albeit with realistic representation replacing the rubber suit. Viewers who have watched Creature from the Black Lagoon will notice Del Toro’s emphasis on the asset’s clawed, webbed hand – although in a much more subtle manner than Taylor. The story unfolds largely from the perspective of protagonist Elisa Esposito (played by Sally Hawkins), an apparently physically disabled woman who works as a cleaner at a secret government installation in Baltimore. The antagonist to Hawkins’ protagonist is Richard Strickland (played by Michael Shannon), a former military officer turned intelligence operative who functions as both head of security and the asset’s handler. In Del Toro’s tale, Strickland is the monster and he embodies everything that is bad about white maleness and the hypocrisy of an American society dually obsessed with prosperity and decency. Elisa first befriends and then falls in love with the asset and the plot follows her attempt to free him from captivity and save him from the scalpel. Like Creature from the Black Lagoon, The Shape of Water is well-paced, moving swiftly from scene to scene in a way that maintains tension and without feeling rushed. The conclusion is fitting for a film labelled as a “romantic dark fantasy drama”.

This crossover of genres – romance, fantasy, and drama, with a touch of horror – is one of several indications that the film belongs to the tradition of Weird fiction. In my review of The City & the City in May I noted the coincidence that two of the best known works in the New Weird genre had been released on the UK small screen within a month of each other. I introduced the genre in my review of Annihilation in March, paraphrasing Jeff VanderMeer’s (author of the Southern Reach trilogy) characterisation of it as combining real-world complexity with transgressive fantasy and contemporary political relevance. I added that the work of both China Miéville (author of The City & The City) and VanderMeer self-consciously subverts one of the central themes of Lovecraft’s Weird oeuvre, his racially-motivated aversion to and obsession with miscegenation.  Similarly, Del Toro portrays the monstrous as positive rather than negative, as a subject of curiosity rather than fear. Like both VanderMeeer and Miéville, he represents miscegenation as a site of empowerment, enhancement, or evolution as opposed to contamination. This makes The Shape of Water the first – or at least the first critically and commercially successful – film in the New Weird genre and, again, there is a puzzling coincidence in the release of The Shape of Water, Annihilation, and The City & the City all within a few months of each other. Given my penchant for the genre, I should perhaps be a little more enthusiastic about the work, but two considerations deterred me from awarding a fifth star. The first is that one needs to be familiar with Creature from the Black Lagoon for a comprehensive appreciation of The Shape of Water (and had I not seen the former, I might well have dropped a second star from the latter). Second, in the words of the director of my own non-secret, non-government institution, it is “self-congratulatory”. Del Toro knows he is telling a story that is clever, transgressive, and relevant and there is something slightly smug about the tone of the film.****