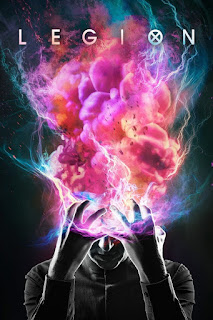 It’s astonishing that after creating season two of Fargo, probably my favourite programme of that year, Noah Hawley went straight on to creating this remarkable show, bringing Jean Smart and Rachel Keller with him. Some viewers took strongly against the slight science fiction elements of Fargo, but no complaints here since this is set in the X-Men universe. When exactly it is set has been a talking point, since of the X-Men films its design looks most like X-Men: First Class, set during the Cuban missile crisis, and the technology seems quite retro. Eventually an adult character, Ptonomy Wallace (Jeremie Harris), mentions hearing 99 Red Balloons on the radio when he was five years old. So my guess is that this is taking place in the present day, or slightly in the future when the wheels of retro fashion have rotated once again.

There is another possibility, that we can’t trust anything on screen, that this is how our protagonist sees the world. As in the comic which clearly inspired the show, X-Men: Legacy (reviewed in TQF59), our protagonist is David Haller (Dan Stevens, so good in The Guest), son of a powerful mutant, with a head full of powers. In the comic, the powers are his, each of his separate personalities having a different ability (like Crazy Jane of the Doom Patrol), and the powers activate either when he gets control of the split personality, or when the split personality gets control of his body. Things aren’t so straightforward (if that’s the word) in the programme. David is seen wielding immense power in moments of great stress, but whether the powers are his to control is unclear. He’s been brought up to think that he is mentally ill, and he has been institutionalized ever since a particularly low point in his life. But at the institution he meets Syd Barrett, played by Keller, and their tentative, sweet romance will lead him out of the institution and into the middle of a war between mutants led by Dr Melanie Bird (Smart) and a mysterious, militaristic governmental department, while trying to cope with his burgeoning powers and mental health problems – if that indeed is what they are. Not everyone thinks so.

In the world of superhero adaptations, this programme stands apart. Much as I enjoy The Flash and Supergirl, no one would consider them a work of art, and that’s what Legion is. Visually it is astounding, as stylish as the work of Mike Allred or Jack Kirby. It is probably the most self-indulgent programme I’ve seen this side of Hannibal, but I think it is exactly the programme it wants to be, and it trusts the viewer to go along for the ride – or perhaps trip would be a better word.

It is absolutely terrifying in places (what’s that at the edge of David’s memories?), but funny in others, and the experienced cast handle every turn of mood with aplomb. It reminded me at times of Patrick (H) Willem’s short film, What if Wes Anderson Directed X-Men?, and I loved that about it. The words “best television ever” were uttered in our living room during the penultimate episode. Between this, Dirk Gently and Preacher it really does feel like they are making television programmes specifically for me these days. I hope other people are enjoying them too so I get plenty more of the same. *****
Posted by Stephen Theaker