I Hate Fairyland, Vol. 1: Madly Ever After, by Skottie Young (Image Comics) | review by Stephen Theaker 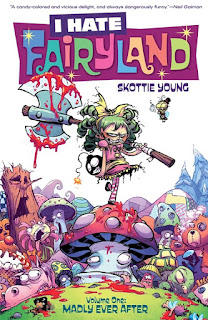 Imagine if Dorothy was totally rubbish at quests, got stuck in Oz for twenty-seven years, and it drove her around the bend. That’s what happened to Gertrude, much to the dismay and misfortune of everyone in Fairyland. This book collects the first five issues of the series. When Gertrude first arrived as a six-year-old girl, good queen Cloudia told her that there was a door back to her world, and she just needed to find the key, “a quest that should only take two shakes of a bogglezig”. The girl sets off with greenfly guide Larrigon Wentsworth III and a map of all the known lands, but never finds her way out. Years later, after Gertrude blows out the brains of the moon and shoots down the stars, the queen has had enough, and starts looking for a way to be rid of the troublesome brat. The rules don’t allow her to harm any guest of Fairyland, but there’s nothing to stop her hiring someone else to do it. This is a fun, raucous, ultraviolent spoof of books like The Wonderful Wizard of Oz. Whereas Catherynne Valente’s similarly inspired (in both senses) The Girl Who Circumnavigated Fairyland in a Ship of Her Own Making tried to reinvent the genre for modern girls, this comic overinflates it till it bursts, leaving bloody entrails everywhere. On Comixology it is rated 17+, but presumably that’s for the over the top ridiculous cartoon violence (the moon getting its brains blasted out, the girl eating mushroom people, that kind of thing), and I think it would appeal much more to younger teenagers. It’s bright, quick-paced, and appealingly grotesque, and I certainly enjoyed it. ****
Posted by Stephen Theaker