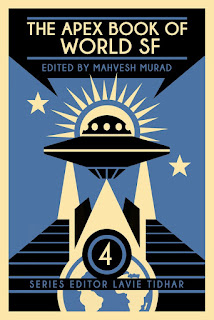 This is a terrifically varied selection of previously published stories from writers all over the world, originally published in 2015. People often declare that individual quality is the only thing that matters when selecting stories for anthologies, which is nonsense: if the ten best stories submitted all had exactly the same plot, only a very poor anthologist would still include them all. The alchemy of an anthology is not just about the quality of the stories – though in the case of this particular book the stories are almost without exception astonishingly good – it is also about flow, and pace, and, as this book demonstrates so brilliantly, variety, which contributes to an anthology at the most fundamental level, by making it interesting. Editor Mahvesh Murad, writing in Karachi, states that “this is not a book of diverse stories”, but the stories are very diverse, in style, subject matter and setting. Those that stood out include Zen Cho’s “The Four Generations of Chang E”, about a woman who moves to the moon and her descendants, and “In Her Head, In Her Eyes” by Yukimi Ogawa, about Hase, a strange new servant who wears a pot to cover her head. “The Boy Who Cast No Shadow”, by Thomas Olde Heuvelt (and translated by Laura Vroomen), was unforgettable, about the romance between the boy of the title and another boy made of glass – an absurd premise, treated completely seriously. “First, Bite Just a Finger”, by Johann Thorsson, about a woman who gets a taste for her own flesh, will also stick with readers, but you could say that about many of the stories in the anthology. For my taste, like most modern anthologies, it’s perhaps a bit on the long side, but it would be silly to complain about that when there aren’t any stories I would have had them leave out. Highly recommended. ****
Posted by Stephen Theaker