The Caped Crusade: Batman and the Rise of Nerd Culture by Glen Weldon | review by Stephen Theaker 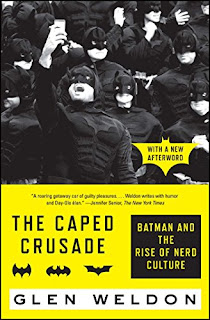 Glen Weldon is a respected writer on books and comic books for NPR, the American equivalent of Radio 4, and a panellist on their excellent weekly podcast, Pop Culture Happy Hour, where his enthusiastically lugubrious voice, ad hoc taxonomies, and ever-readiness with an overarching theory make his contributions always entertaining. Though this sadly isn't a review of the audiobook edition, his distinctive voice can still be heard in every sentence, making this book (Simon & Schuster, hb 336pp, £16.99) a real pleasure from start to finish. Literally to the finish, since the bibliography is annotated with comments from him, and because he's a very interesting chap those comments are very interesting too.

The book is dedicated to Bill Finger, the original Batman writer, and it does a great deal to show how important his contributions to the character were. Even those who have read Batman books by the dozen may be surprised to learn that Bob Kane, “creator” of the Bat-Man, did so by tracing an Alex Raymond drawing of Flash Gordon on a rope swing, colouring his outfit red and blue, and giving him a domino mask. Milton “Bill” Finger was a quiet kid who wrote the scripts, and none of Bob Kane's editors even knew he existed, but Weldon tells us that Finger suggested the ears, the cape, the gloves and the colour scheme.

The dark knight's lack of regard for human life in his latest cinematic outing, Batman v Superman: Dawn of Justice – the result, perhaps, of a death in the family – has provoked much controversy, but it's worth remembering that this is a guy who even at his jolliest still punches and kicks a number of people very hard in the face every night. Chances are, that would be enough to rack up quite the body count even without guns mounted on the Batmobile.

From Weldon we learn how little that violence conflicts with the character's early days: in his first year he killed twenty-four men, two vampires, a pack of werewolves and several giant mutants. Weldon argues that it's to this “grim, violent proto-Batman” that Denny O'Neil returned in 1970, establishing that as the “real” Batman once the swinging sixties were over: making the loner, badass Batman the default inspiration for later retellings by Frank Miller, Tim Burton, Christopher Nolan and Grant Morrison.

This isn't a book that trundles along with the critical orthodoxy; it has its own ideas at every turn. Apparently the Batman tv series was not well-liked among American fans, despised even, which may be a surprise to those of us brought up to think of it as a bona fide television classic. But this book sticks up for it, and identifies the neverending (and not so positive) effects of the ensuing backlash, which even now has barely petered out. When Weldon talks about Dr Fredric Wertham and his crusade against comics, readers may be shocked to see him say that, at least with regard to Batman, “The guy had a point.”

Being gay, the young Glen Weldon didn't just notice the “subtle atmosphere of homoeroticism” in the comic, he rather enjoyed it. Of course he notes how Wertham manipulated and misrepresented the evidence (for example deleting statements that the young men were much more strongly aroused by Tarzan in his loincloth and Marvel's Sub-Mariner in his skimpy swim trunks), but also praises how passionate and progressive he was in calling out racist and sexist stereotypes.

What Weldon really tries to get at is why Batman works. Why he appeals to nerds and why he is popular with normals (to use his words for those groups), why virtually all his films are huge financial successes, why so many of the comics, games and cartoons work so well, whatever the mood, whatever the style, from the sublime Batman: the Animated Series, which Weldon adores, to the technicolour team-up Batman: The Brave and the Bold, the finale of which he describes as a tour de force.

Partly, of course, this is because the character is owned by a huge multimedia company which can invest in paying the best talent to work on him. Put all that talent to work on Bouncing Boy and you'd still end up with some great comics, games and movies. For Weldon, though, what sets Batman apart, what creates the bond between Batman and Batfans, is a very specific thing: “the oath”, Bruce Wayne's candlelight vow to spend the rest of his life warring on all criminals to avenge the deaths of his parents. That is to say, he is just as obsessed as his fans. ****

This review originally appeared in Interzone #264.
Posted by Stephen Theaker