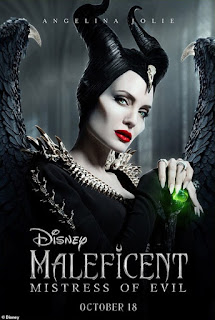 One can’t help but be drawn in when Maleficent’s (Angelina Jolie) vampiric face fills the screen. It is impassive, cadaverous. Shockingly prominent cheekbones frame snakelike eyes. And the lips… they’re red enough to stop traffic. Unlike the physically expressive Joker (her top box office competitor), Maleficent is perfectly poised… even, it seems, when she’s angry.

In Maleficent: Mistress of Evil, directed by Joachim Rønning, the unfairy-like fairy has met her match: Ingrith (Michelle Pfeiffer), duplicitous queen of Alstead. Queen Ingrith’s words and actions are as cold and calculated as her colorless wardrobe.

Prince Philip (Harris Dickinson) of Alstead proposes to a gleeful Aurora (Elle Fanning), whom Maleficent has raised and installed as queen of the Moors, home of all kinds of fantastical creatures. Philip’s parents King John (Robert Lindsay) and Queen Ingrid applaud the union, albeit for different reasons. Maleficent, wary of humans, is reluctant – rumours labelling her and her kind as killers of men have spread amongst the inhabitants of Alstead.

When the parents meet for dinner at Alstead Castle, tension reaches an apex: Queen Ingrid knows just what to say to try Maleficent’s patience. Philip and Aurora attempt to de-escalate the situation. A debacle ensues. Maleficent finds herself amid the exiled dark fey. Back at Castle Alstead, plans for the wedding move forward… as do other, more nefarious plans.

Disney’s beautifully rendered fantasy settings share the stage with the leading ladies. Examples include the vibrant moors, the pristine gardens of Castle Alstead, and a stunning cave setting. Then there are the creatures that populate this world: colourful fairies, giant tree creatures, and pixies galore.

The film’s biggest drawback is the way that the dark fey are portrayed. They are one-dimensional and theatrical – one gets the impression of high school students using exaggerated movements to compensate for a lack of meaningful dialogue. Moreover, the group’s two leaders who externalize an angel/devil battle within Maleficent are weakly drawn.

This film pulls out all the typical stops to induce emotion. Admittedly, it worked on me. Positive messages abound: forgiveness, the mother/daughter bond, self-sacrifice, cultural integration, and, perhaps most prominently, peace between the natural and human worlds.—Douglas J. Ogurek ****