World of Water by James Lovegrove | review by Stephen Theaker 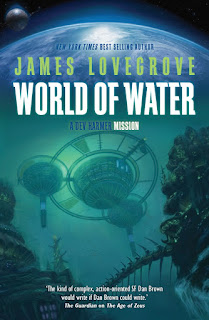 Dev Harmer died at Leather Hill, the worst battle of a terrible decade-long war between humanity and Polis+, AI zealots who see an atheistic humanity as their natural enemy. The war ended in a truce, Harmer's consciousness was saved, and now he is downloaded by Interstellar Security Solutions into one genetically modified host form after another. His job: to foil the plots of spies and saboteurs working for Polis+. This is the second book of his adventures, but like the Dumarest books of E.C. Tubb you could begin with any of them. He was having adventures well before the first book began, and he'll have many more after this one ends, unless he earns enough credit at last to buy himself a new copy of his original body.

Not so fresh from his gruelling adventures on Alighieri in World of Fire, Harmer now continues his fight against the "digimentalists" on Robinson D in the Ophiuchus constellation, also known as Triton. His previous body was that of a miner suited to work on an extreme thermoplanet: short, heavyset, muscular and stumpy, with nocturnal vision and the face of a boxer who had gone a few too many rounds. This time he has high cheekbones, protective eye membranes, webbed fingers, gills on either side of his neck, and a face that can flash bioluminescent messages to those that can understand them. This is his first time as an amphibian – but the body has been compromised. It'll be dead in three days.

He needs an amphibious body because Triton is an ocean planet. It was an ice giant until a small shift in axial rotation warmed things up. That event persists in the legends the indigenous Tritonians tell of the Ice King, who sleeps in the ice at the heart of the world and will awaken when the time is right. None of the indigenous people are happy to have forty thousand humans building habitats on the ocean surface, and those angry enough to fight in the name of the Ice King are able to find plenty of support, and, predictably enough, Dev soon finds that the colonists are less than innocent.

It's his job to bring peace to this world, and in the process uncover any Polis+ activity. In three days. Before he can get started, he'll need to get his gills working, and that means a merciless swimming lesson, where his ISS liaison pushes him fifteen metres down into the ocean. Just when he's about to black out, he breathes in the cold seawater, and feels it rush down his throat, and out through his neck, giving him oxygen as it passes through – even after just two books, it's clear that a big pleasure of this series will be the way Harmer adjusts to the quirks of each body, and works with the skill set of each. This is not a body built for brawls in bars, for example, and Dev almost comes a cropper when he gets drawn into one. But at least it gives him a lead… And in the water it's a different matter, as we see when he encounters a seven-metre long thalassoraptor and all its teeth.

Harmer is absolutely the star of the show here (at least until the story's ultimate – and extremely epic – enemy is revealed), but he has a strong supporting cast. He forms an alliance with a Tritonian who has no love for humans but wants a peaceful resolution to it all. Her true name is a complex configuration of geometric patterns, an emotional autograph designed to convey an attitude of determination, resolve and desire for justice, and she more than lives up to that in the course of the book. On the human side, he is teamed up with First Lieutenant Sigursdottir and her band of brave and heroic female Marines. Dev takes an instant liking to her, but it'll take some work to earn her trust.

This is a book (Solaris ebook, 384pp, £5.99) for anyone who thinks they don't make 'em like that any more. Well, they do, and to all the action and thrills you could possibly want James Lovegrove adds a good deal of intelligence, tackling post-colonial issues head-on while showing us a fascinating alien culture, all in chapters that end in cliffhangers and are short enough to entice the most reluctant adult reader. The series has a great premise, but it's not a formula: this book offers a completely different experience to the first. The ebook is clever too: switch to publisher fonts to see how they are used to distinguish between different types of non-verbal speech. A brainy blockbuster. ****