Theaker's Quarterly Fiction #65: UNSPLATTERPUNK! 3: now out in paperback and ebook! 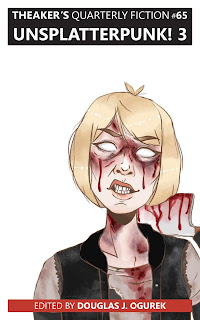 A soon-to-be father focuses on helping others amid a Martian base massacre that shows the repercussions of human intrusion. Outraged women unite to stop a high-ranking male oppressor, and in the process, unravel the key to combating male chauvinism and its disastrous effects. A woman, certain of the upstanding life she’s led, learns a lesson that will seal her postmortem fate. Support group bloodshed leads to a scientific breakthrough. Three brothers on an Irish farm dismantle a brutal patriarchy… and chop off body parts. Back-of-theatre make-out sessions plunge to new slimy depths in an exploration of the pressure teens feel to become sexual legends.

So put on your coveralls and jump into the carnage and debauchery… You’re going to get filthy, but you’ll also emerge with a sense of hope.

Also includes reviews of books by Aliette de Bodard, John Llewellyn Probert, Laurie Penny, Pixie Britton and William F. Temple, and of the films Aquaman, Crawl, Every Day, Glass, It Chapter Two, Mary Poppins Returns, Ready or Not, Under the Skin and Us, and of the television series Carnival Row.

Here are the gore-unsplattered contributors to this issue:

Chris Di Placito is a writer living in Fife, Scotland. His work has appeared in magazines such as Litro, BULL, Porridge, Ink In Thirds, STORGY and Structo.

Douglas J. Ogurek is the pseudonym for a writer living somewhere on Earth. Though banned on Mars, his fiction appears in over fifty Earth publications. Douglas’s website can be found at www.douglasjogurek.weebly.com and his Twitter account is at www.twitter.com/unsplatter.

Drew Tapley is a British copywriter, journalist and filmmaker based in Toronto.

Garvan Giltinan is a recovering Irishman with a fascination with the bizarre/grotesque/puerile. His work has appeared in the anthologies New England: Weird, Triggered, and Fatal Fetish. Forthcoming publications include the novel Backdoor Carnivore (JEA Press) and the short story “Titty Kitties” (Thicke and Vaney Books). Giltinan has an MFA in Creative Writing from Pine Manor College, and really weirds out his wife with the subject matter of his stories.

Joanna Koch writes literary horror and surrealist trash. Author of the novella The Couvade and other short fiction, Joanna has been published in journals and anthologies such as SYNTH #1: An Anthology of Dark SF, Honey & Sulphur and In Darkness, Delight: Masters of Midnight. Joanna is a Contemplative Psychotherapy graduate of Naropa University and lives near Detroit. Follow their monstrous musings at horrorsong.blog.

Stephen Theaker is the co-editor of TQF and shares his home with three slightly smaller Theakers, one of whom provided the art for this issue's cover. His reviews, interviews and articles have also appeared in Interzone, Black Static, Prism, BFS Horizons and the BFS Journal.

Manchester, UK-based Tom Over is a writer of dark, speculative strangeness. He grew up loving all things horror and has been suckling on the gnarled teat of weird fiction ever since he was knee high to a Mugwump. He generally divides his time between watching cult movies with his girlfriend and working on his first collection. To date, his work has appeared in CLASH Media, Aphotic Realm, Crystal Lake Publishing and Horror Sleaze Trash amongst others. His first collection is due for release in early 2020 from NihilismRevised.

Zeke Jarvis is a professor of English at Eureka College. His work has appeared in Moon City Review, Posit and KNOCK, among other places. His books include So Anyway…, In A Family Way, Lifelong Learning and the forthcoming The Three of Them.

As ever, all back issues of Theaker’s Quarterly Fiction are available for free download.
Posted by Stephen Theaker