The Rise of Skywalker | review by Rafe McGregor

A conclusion four decades in the making. 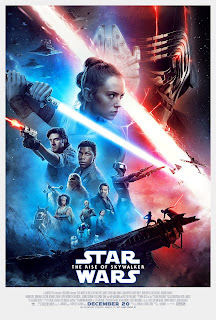 The release of the final instalment of the Skywalker Saga over Christmas in the UK provided me with the first opportunity to visit my fellow film nerd and former employer since moving house, in consequence of which I was very much looking forward to the whole day. The pleasant sense of anticipation offset a phenomenon that I’ve never experienced before in forty years of watching Star Wars: despite having seen both The Force Awakens (released in 2015 and directed by J.J. Abrams) and The Last Jedi (released in 2017 and directed by Rian Johnson) on the big screen, I had no recollection of where the narrative of the Sequel Trilogy had paused when the latter concluded. To make matters worse, I’d confused what little I did recall with Solo: A Star Wars Story (released in 2018 and directed by Ron Howard), which I’d also seen on the big screen (and thoroughly enjoyed) in the interim. This literal loss of plot on my part was unprecedented – unthinkable in not only the Original Trilogy so adored by my generation but even the Prequel Trilogy that proved such a palpable disappointment to so many of us. Even in The Phantom Menace (released in 1999 and directed by George Lucas) at its silliest and most spurious, there was always a clear sense of the narrative direction – working towards the rise and fall of Anakin Skywalker, the destruction of the Jedi, and the beginning of A New Hope (released in 1977 and also directed by George Lucas).

In my review of The Last Jedi, I characterised Johnson as having tread a fine line between revisiting and rebooting, following Abrams in The Force Awakens by reproducing the plot, characters, and setting of the Original Trilogy. Looking back over the full saga, the overarching narrative seems to move in a series of circular cycles. The Jedi, given their military prowess, prescient wisdom, and communion with the Force, have a perverse predilection for getting wiped out (in George Lucas’ 2005 Revenge of the Sith and the interim between the Original and Sequel Trilogies) and the Empire keeps bouncing back no matter how many devastating defeats it suffers (in George Lucas’s 2002 Attack of the Clones and Richard Marquand’s 1983 Return of the Jedi). The problem with this is that if the Skywalker Saga ends – as the title of the final episode suggests – with the rise of the Jedi (for at least the third time) and/or the defeat of the First Order (AKA deep state Republic, Empire, Last Order), then it seems unlikely that this status quo will last for longer than a few decades before the next cycle of rise and fall. And if this is the case, the three trilogies become somewhat interchangeable and the risk is that both The Rise of Skywalker and the Sequel Trilogy as a whole will bring the Skywalker Saga to an anticlimactic conclusion – one that could rival what is probably the most famous anti-climax in speculative fiction, “The Scouring of the Shire” in J.R.R. Tolkien’s Return of the King (from The Lord of the Rings).

Abrams appears to be well aware of this problem and deals with it by very quickly revealing that Darth Sidious (AKA Senator Palpatine, the Emperor and played by Ian McDiarmid) not only survived the Original Trilogy, but has been manipulating events from the very beginning of the saga and is, on consequence, the antagonist of all three trilogies as well as the saga as a whole.  His role simply varies, one might say, from being the power behind the throne to the power on the throne (and back again). The mission of General Leia Organa (played by the late Carrie Fisher, courtesy of some very clever CGI) and the Resistance is thus to thwart Sidious’s machinations and, in defeating him once and for all, bring the threat he has posed to the galaxy to an end. In my review of The Last Jedi I mentioned the development of a dramatic tension between Rey (played by Daisy Ridley) and Ren (AKA Ben Solo, Supreme Leader Kylo Ren and played by Adam Driver) and this is intensified in The Rise of Skywalker, becoming the axis around which the plot of the film revolves. Once Sidious is set up as the villain, two questions emerge. First, whether Rey and Ren will unite forces and second, if they do, whether it will be in service of the Sith or in service of the Jedi. Where I previously lamented the lack of a love triangle in both the Prequel and Sequel trilogies I think the increased focus on the relationship between the two worked very well because the raised stakes (and increased screen time) presented not only the two questions noted above, but further questions such as whether a galaxy without the Sith needs the Jedi at all. I am pleased to say that these and many other questions are all answered.

Having mentioned The Lord of the Rings books in the context of anti-climaxes, I should add that Abrams employs several filmic quotes or draws upon the imagery of (I am not sure which) Peter Jackson’s cinematic adaptations of Tolkien: the Knights of Ren reflect the Uruk-hai, Finn and Jannah’s charge recalls Faramir’s ill-fated attempt to recapture Osgiliath, and the Sith homeland of Exegol resembles Mordor. This is not, however, to detract from The Rise of Skywalker and, having reached the end of Lucas’s three stories of three acts each, it seems entirely appropriate to reach beyond the genre of science fiction to fantasy, reminding the audience of the many similarities between the two. If I have one complaint it is that while all the questions are indeed answered in a satisfactory manner, Walt Disney Studios Motion Pictures could not resist a final few minutes in which the foundation for another saga is established – a literal investment for the future, in case the company directors decide that their net worth of $130 billion (according to Business Insider) isn’t enough. ****
Posted by Rafe McGregor