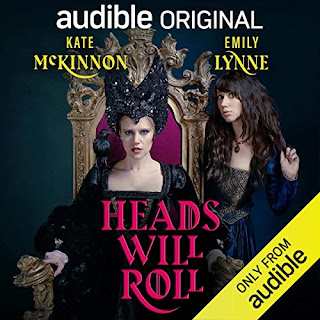 This Audible series is written by and stars the reliably hilarious Kate McKinnon and her sister, Emily Lynne. It is often very funny, like an 18-rated version of Radio 4’s Elvenquest, albeit without a studio audience. McKinnon plays Queen Mortuana of the Night Realm, a typical fairy tale evil queen, albeit with a foul mouth and a sex dungeon, who is warned by a soothsayer that a peasant rebellion is imminent. Lynne plays JoJo, a former princess cursed to live as a crow.

Meryl Streep, no less, is in it as the nation’s beloved actor, Catherine Staunch, who becomes a political rival as democracy starts to rear its beautiful head. As well as Peter Dinklage and Carol Kane, there are appearances from half the SNL cast, including Aidy Bryant, Heidi Gardner, Alex Moffat as romantic interest Odin, and Chris Redd as Lil Pelicayne, a prince cursed to live as a pelican. (He raps in character on Flap It Out, available as a free download from Audible.) The chaps from Queer Eye also make a fun appearance, giving Mortuana a makeover.

I hadn’t planned to review this audiobook, but when I found myself handselling it to one person after another online I realised (a) how enthusiastic I was about it and (b) that it might be somewhat quicker to tell you all about it at once in a review. It may not be astonishingly original, but it is a lot of fun, and a good deal of work has clearly gone into it. The only thing that gets a bit annoying is the Yeah Yeah Yeahs song used as the theme song at the beginning of each episode, and that’s only because it’s a bit too loud. ****