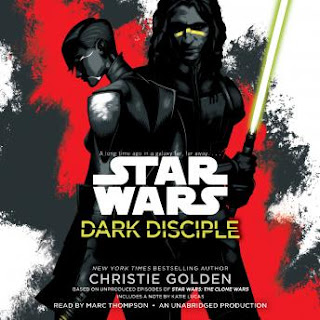 Somebody, Please Kill Me.

Dark Disciple is a suitably epic tale set amidst the Clone Wars (and based, apparently, on unmade scripts for the animated series). It lays the thematic groundwork for Anakin Skywalker’s fall to the Dark Side. It eschews multiple storylines and tedious politics and concentrates instead on space opera Jedi action. Golden does so much right.

The story begins with the Jedi Council, prompted by the ever-bullish Mace Windu, determining that Count Dooku must die. They cannot capture him; ergo, he must be assassinated. The Jedi, in other words, will put everything they believe in aside to end the war. Quinlan Vos – a Jedi Master and expert in undercover work – is assigned the task, and with a view to completing the mission must first gain the trust of Asajj Ventress, Dooku’s erstwhile apprentice, who has turned against the Count and is now forging her way as a bounty hunter.

So far, so good. Vos hides his Jedi abilities and becomes Ventress’s partner. They work well together and Ventress turns out to have redeeming features. She’s not so steeped in the Dark Side as Vos was led to believe. Or rather, she is, but she isn’t controlled by it. Ventress is a Night Sister and her management of the Dark Side isn’t the wholesale abandonment that is so defining of the Sith. This is a key point in the story’s favour. The exploration of the Dark Side as something more subtle than merely the evil Hyde-side of the Force is what makes events plausible (at first). Vos and Ventress fall in love. Their relationship foreshadows that of Anakin and Padme. Narratively, all is well.

In preparing Vos to survive an encounter with Dooku, Ventress has him summon an ancient creature from the swamps of her homeworld. Vos must control it by force of will and then kill it – an execution with no purpose other than to taste the Dark Side. Just as he must cast aside his Jedi ideals to assassinate Dooku, first he must show that he can tap into the Dark Side of the Force and not be consumed by it. He must harness its power but stay in control. In short, he must prepare himself to use evil with good motivation and be able to come back. Bravo! A compelling exploration of everything that fails to come through properly on-screen in the Prequel Trilogy. This is what we should have seen in Anakin’s fall.

Unfortunately, however, Golden becomes so focused on Ventress and Vos that she rather forgets about the central plot angle; that is, the assassination of Dooku. And no matter how sweeping the romance / sacrifice / “has he turned? is he faking?” take on Vos’s embracing of the Dark Side, none of it can work properly if the action makes no sense.

And in this case, it really, really doesn’t.

1. Vos has been sent to assassinate Dooku. No duelling. No banter. Not dead or alive. Just dead. The whole point is that Dooku won’t be given a chance. Effectively, literally if possible, Vos is to shoot him in the back. Ventress knows this. She’s in on the plan. But what do they do? Vos and Ventress infiltrate one of Dooku’s functions. They undertake to separate Dooku from the protection of General Grievous. Yet, Dooku and Grievous are already separated. New plan: Ventress will announce herself, thus prompting Dooku to call for Grievous, whereupon Vos can waylay the general and then join Ventress against Dooku in exactly the kind of two-on-one lightsaber battle they were looking to avoid. Ventress, to attract Dooku’s attention, steps up behind him and whispers in his ear! She has her lightsaber. He hasn’t sensed her presence. Where’s the sizzle, hiss? That should be the smoking corpse end of the mission right there.

But it isn’t. This is incredibly clumsy plotting and it undermines the thematic heft. How can we explore questions of dark intent if the so-called assassination becomes just a contrived duel of honour? Sigh. Up until this moment I was really enjoying the book! But it doesn’t end there. Vos and Ventress are defeated. Vos is captured and taken away by Dooku to be tortured and turned to the Dark Side. Ventress gathers together a posse of bounty hunters and comes to rescue him. Vos has indeed turned. He resists Ventress. Indeed, he fights against her. Which brings us to…

2. Ventress lures Vos from Dooku’s stronghold. The bounty hunters are holding off Dooku’s droids. Dooku himself has been tangled up in a net. Instead of going with Ventress, Vos continues to fight. He frees Dooku from the net – and later claims that he did so to gain Dooku’s trust so that he could complete the mission of assassinating him! Holy cow. Now, there turns out to be a reason for Vos not killing Dooku there and then. (In essence, he really has turned.) But no-one on the Jedi Council calls him out over the inconsistency.

And so, the back-and-forth continues. Vos becomes Dooku’s right-hand man and new scourge of the war. Ventress, Obi-Wan and Anakin are tasked with a new assignment – to capture Vos and bring him back… or kill him. They infiltrate the ship they believe him to be commanding, but find Dooku instead. Vos, it transpires, is locked up in the ship’s dungeon, still being tortured. He hasn’t been turned after all! And so…

3. Ventress and Obi-Wan run off to liberate Vos, leaving Anakin alone to duel it out with Dooku. The logic here is astounding. What happened to the original mission of “Kill Dooku at any cost”? It’s three-on-one! They can dispose of Dooku together and then see to Vos. But no. Anakin is left by himself. Vos is rescued. Anakin reappears… and the others don’t even ask him what happened. The outcome of his fight with Dooku is never mentioned.

And this is the crux of the problem. Star Wars continuity demands that Dooku survive. The Dark Side plot demands that there always be someone to turn or tempt Vos. Golden has decided that Vos and Ventress’s thwarted love story is everything. Assassinating Dooku was imperative, and is the catalyst for the entire tragedy that Golden wants to explore, yet at every turn it proves an inconvenient hurdle. So much so, that…

4. To top off proceedings, there comes a final showdown. Dooku is badly injured – close to death, in fact. Ventress sacrifices herself to bring Vos back from the Dark Side. Obi-Wan and Anakin arrive and take custody of Dooku. They still don’t kill him. Instead, glossed over in Vos’s grief-stricken fugue, Dooku simply “escapes”. No detail. Not even an attempt to explain how the almost-dead Count gets away from two uninjured Jedi (one of them a Master) and half a clone army. Golden deems this unimportant.

But it’s not. The failure to do away with Dooku – or even to half-plausibly explain it; or even try to – is itself terminal to what the book is trying to achieve. Vos and Ventress should be tragic figures in the mould of Tristan and Isolde, but instead, because the realism isn’t there, they become ridiculous, as do the Jedi and, by association, the Star Wars universe more generally. To repeat: the elements are present. This book could have been a crowning moment in the written canon. Instead, the whole enterprise is just laughable.

(For those interested in such nuances, the Penguin Random House audiobook version rather exacerbates the sense of forced drama, playing out with lame sound effects and an overly emphatic musical score, not to mention Marc Thompson’s this is so powerful I’m describing everything as if– I’m– gritting my teeth and– fighting against– constipation style of delivery.)

Dark Disciple epitomises both what Star Wars does so well (action, adventure, grand sweeping SF mythology) and where it often falls down (romance and credibility, big moment characterisation). Rather than putting paid to Dooku, Golden instead sounds the death knell for my appreciation.