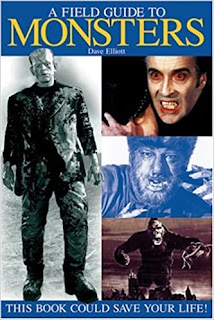 Killer ants, 500-foot-tall moth-goddess, and everything between: manual gives tongue-in-cheek overview of cinema’s most famous monsters.

Turn to the “Reptile” page of Monsters: A Field Guide to Blood-Thirsty Beasts and you’ll see a black and white photo of a woman dressed in a bad snake costume. The makeup is crusty, the fangs are obvious fakes, and one of her buggy eyes faces the camera while the other faces a different direction. What a perfect symbol for this irreverent guide to monsters both villainous and heroic.

This book’s strength is the humour that occurs in its descriptions of the characteristics, behaviours and backstories of the monsters that star in the most well-known horror, sci-fi and fantasy films. Each monster profile has a photo accompanied by quips about its physical features.

There are many references to contemporary culture (or at least what was contemporary when the book was published in 2008). One example is the “relatives” box within each entry. Here the authors claim, for instance, that the Beast from the 1980s TV series Beauty and the Beast is related to Jon Bon Jovi – it’s got to be that rock star hairdo. One of the funniest parts of each entry is the “description”, especially when the authors give an underwhelming summary. A creature, for example, might simply be described as “red”.

The authors reveal flaws with sardonic flair. Why, for instance, does the Creeper from the Jeepers Creepers franchise wear a heavy overcoat in the summer weather? Then there’s Colossus, who wears a cloak so that people won’t recognize he’s a nine-foot-tall robot. Each creature also has an endorsement. Jack Torrance from The Shining has The Overlook Hotel, Count Vlad Dracula has the Red Cross and the Children of the Damned have Trojan.

Each summary uses red dots on a map to pinpoint where the creature(s) is found in the world. The Thing, for instance, shows one dot in Antarctica, while the “Savage Bees” from The Swarm consume the map. The map for Hal 9000 from 2001: A Space Odyssey zooms out to show several planets with a red dot on the periphery. Entries also show the size of a creature compared to a familiar object, most often a man. The objects, however, range from something as small as a book to as large as the Statue of Liberty.

Chapters are divided into categories ranging from “Manufactured Monsters” to “Mutated Vegetables”. In the “Mutated Lizards, Fish, and Dinosaurs” chapter, the authors latch on to their subjects’ one-dimensionality and penchant for mindless killing. Jaws targets young swimmers, especially those who like to skinny dip. They also contrast western dragons, known to destroy everything in their path, with eastern dragons, which prefer more harmless pursuits, like studying with monks, playing with kites, and communicating with other creatures living above the cloud line. The “Monster Men” chapter offers classics like Leatherface and Norman Bates, as well as several doctors gone rogue. A chapter on “Mutated Men, Women, Animals, and Insects” has everything from Wasp Woman to killer ants, while the “Supernatural Monsters” chapter has good guys like the Crow and Blade and bad guys like Dracula and his many manifestations.

The only drawback of this collection is that it makes our most iconic monsters a little less… monstrous. Maybe that’s a good thing. – Douglas J. Ogurek ****